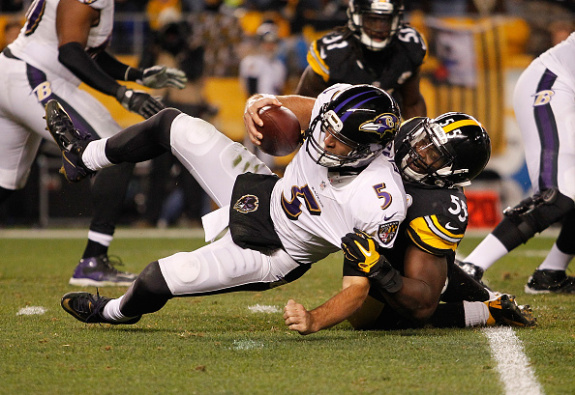 Like a fine wine, James Harrison is only getting better with age.

Playing more like the Harrison that dominated the game on the defensive side of the ball in 2008 when the won the NFL Defensive Player of the Year award, #92 was on a mission Sunday night, playing with as much purpose as ever as the Steelers won their third straight, running away from their bitter rivals the Ravens 43-23 at Heinz Field.

The game was also special as the team retired the jersey of “Mean” Joe Greene, and a lot of #75 jerseys could be seen around the stadium, a solid tribute was paid by a Steelers defense that laid the boom down on Ravens QB Joe Flacco and a Baltimore offense that had their way with the Steelers in week two of the season.

Not to be totally over shadowed by the defense, Ben Roethlisberger and the Steelers offense continued to put up video game like numbers, as the QB making a run at the NFL MVP award this season went 25-for-37 for 340 yards with six touchdowns. He’s now thrown 11 TD’s in his last two games, and on the season has 22 touchdowns with three interceptions and a QB rating of 105.6.

The Steelers trailed early 7-0 after Flacco hit Torry Smith with a TD pass from 35 yards out with 9:41 to play in the first quarter. The offense had their issues early for the black and gold, but once they got their first turnover, a fumble recovery after Ravens RB Lorenzo Taliaferro put the ball on the turf, the offense went to work.

They scored 22 second quarter points, and went into the locker room leading it 22-10 after Ben threw TD’s to Le’Veon Bell, Martavis Bryant, and Markus Wheaton, the last a 47-yard TD pass with less than a minute left in the half.

The extra point was bobbled, and punter Brad Wing picked up the snap and threw to TE Matt Spaeth for a 2pt conversion.

The defense continued to make it a long night for Flacco and the Ravens in the second half, with Harrison and his pals collecting a total of four sacks, a fumble recovery and a pick. Harrison had two of the four sacks.

Ben threw three more TD passes in the second half to seal the win, with Antonio Brown, Bryant and Spaeth all collecting scores to put the game away and push the Steelers to 6-3.

With the win, the Steelers are percentage points behind the Bengals in the AFC North. Cincy with a win Sunday are 6-2-1 on the year, with a Thursday night game vs the Browns this week.

The Steelers are on the road the next two weeks, starting Sunday against Michael Vick and the Jets in New Jersey at 1pm.