What Ben Roethlisberger has done for the Steelers lately 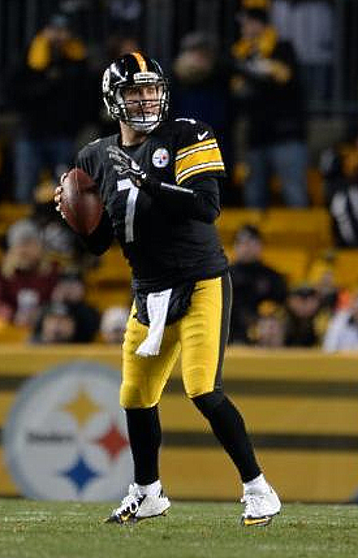 Ben Roethlisberger has done what no other quarterback has done in Pittsburgh – post back-to-back six touchdown passes in a game.  In fact, no other quarterback in the National Football League has ever passed for 12 touchdowns in two games.  Roethlisberger earned the Steelers Digest Player of the Week honor after completing 25-of-37 passes for 340 yards, six touchdowns and zero interceptions despite being sacked three plays in a row against the Baltimore Ravens.

Steelers fans knew ‘Big Ben’ to be a tough leader, and against the Baltimore Ravens he took a hard hit to the chin only to loosen up his arm and find open receivers for points on the scoreboard.

Last week (against the Indianapolis Colts), Roethlisberger was only a few yards short of Norm Van Brocklin’s NFL record for passing yards in a game.

In three weeks, Roethlisberger has silenced critics who felt that he was no longer an elite quarterback, had seen his best days on the football field and was mediocre at best.  Roethlisberger walked onto Heinz Field and slammed the door on the Houston Texans, Colts and then the Ravens, picking the Steelers up off of the turf and providing veteran leadership – and then he simply shattered the ceiling that NFL quarterbacks like Tom Brady and Peyton Manning appeared closer to breaking.

Roethlisberger certainly appears to be giving Pittsburgh a reason to keep him around as their franchise quarterback following the season.  Although the team wouldn’t extend his contract before the season, the Rooney family has just seen history made yet again in their franchise.  The argument that the team needs to reach out to him and allow Roethlisberger to finish his career in Pittsburgh is likely to be just beginning.