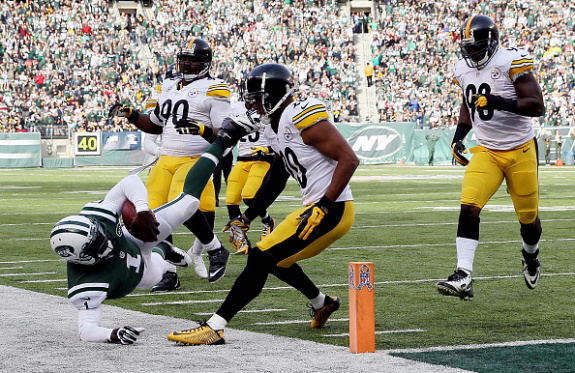 Did you get what you thought you would see from their defense?
Nothing obscure. Really what we looked at, what they are.

This sort of thing has happened over the last three or four years. Is there any pattern to it?
What, minus four in losing? I’m sure there is. If you look at the history of the NFL and you’re minus four in the turnover ratio you have strong possibility of losing.

You threw a lot of short passes in first half. Was that because of their pass rush?
We have guys running short and deep on just about all plays from a route distribution standpoint. Sometimes coverage dictates where the ball goes. I would have to look at it to be more detailed than that.

Did you have any thoughts about going for it on fourth down before the Shaun Suisham miss?
I did not. I thought we had an opportunity there to get it to a two-score game and move on. Time was not of real significance at that point. But we didn’t make the kick.

What was the official’s explanation of the Michael Vick fumble that you challenged?
I’ll let him deal with that. I thought we had a fumble and clear recovery. Evidently I was wrong. They reviewed it.

You know on any given Sunday anything can happen, but this has to especially hurt being that they were only 1-8 and these are games you need to take advantage of.
Minus four will do it.

Do you feel the team came out emotional?
I really don’t get into all of that. You play for 60 minutes and so forth. Bottom line is we didn’t do what was required to win today. We didn’t secure the ball, we didn’t get the ball. It’s not winning football.

What does Ben need to do to get back into playing turnover free football?
We just have to roll our sleeves up and go back to work, not only him but our football team. I trust that they will do that.

You deferred the kickoff to the second half. Why?
I’ll leave that decision making to us. It’s a decision that needs to be made on a week-in and week-out basis. That’s the decision that we came to today.

Was James Harrison being involved in the offense something you planned on all week?
For several weeks. It’s something that we work on. It’s an element of our football.

Was that pass intended for him on that play?
No, it was not.