Can The Pittsburgh Steelers Secondary Hold Up? 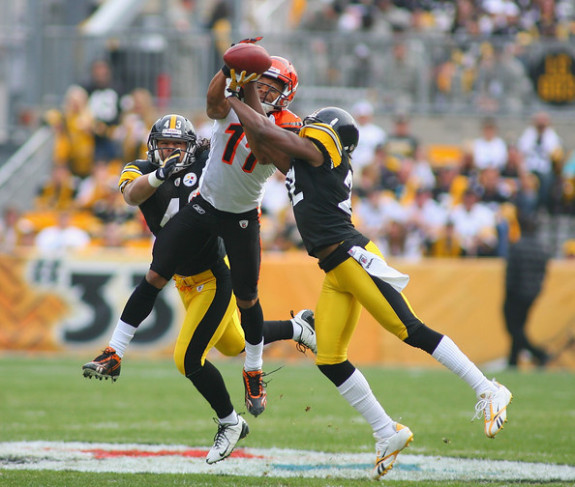 It’s no secret that the Pittsburgh Steelers have suffered injuries in the secondary this season. Despite the up and down performances, the Steelers are 8-5. This Sunday, the Steelers secondary faces a huge test against the Atlanta Falcons receivers. Safeties Troy Polamalu, Mike Mitchell, and Shamarko Thomas will be counted on to be physical and help out on double-team coverages as well.

Last night, wide receiver Julio Jones caught 11 passes for 259 yards for one touchdown for the Falcons against the Green Bay Packers. Most likely, cornerback Brice McCain and Antwon Blake will have the assignment of covering Jones if he is able to come back from the injury he sustained in Monday night’s game. Defensive back William Gay will be assigned to cover long-time standout Falcon receiver Roddy White.

The Falcons’ pass offense ranks 5th in the NFL, averaging 284 yards passing per game while the Steelers’ pass defense ranks 22th in NFL. Falcons are 5-8, but are 0-8 against opponents outside of their NFC South division – a positive sign for the Steelers.

In this game, Gay, Blake, and McCain will be tested on long pass plays as the Falcons love to throw the football deep. Jones stands at 6’3″and White stands at 6’0″, so the Steelers corners must be sharp on technique and force the receivers toward the sideline, not allowing the receivers multiple chances to run routes in open space.

If anything has been learned about the NFL this season it’s that it’s a week to week adventure. A steady pass rush by Pittsburgh will go a long way to helping the secondary.  If any bad passes are thrown by quarterback Matt Ryan, the Steelers secondary can not afford to drop any interceptions. If the secondary has at least a decent performance Sunday, and the Steelers offense continues to roll, it gives the team a more than fair chance of winning.

Five Takeaways Following the Steelers Win Over the Bengals
Steelers’ Wheaton, Bryant Need To Raise Their Level Of Play