Five Takeaways Following the Steelers Win Over the Bengals 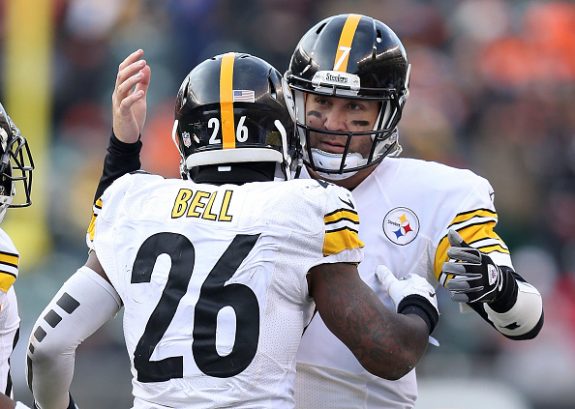 The Steelers got right back into the AFC Playoff race Sunday with a 25-point fourth quarter and a huge 42-21 win over the rival Bengals in Cincinnati.

The team still had plenty of issues on defense, allowing A.J. Green to run all over the place, making lots of catches for over 200 yards. Like the Tennessee win though, the D stepped up when they needed to in the fourth quarter to hold off Cincy and clinch the win.

Here’s five things we took away from the win as the club looks ahead to its final road game of the regular season Sunday in Atlanta vs the Falcons.

1. Great Execution on Third Down – It took awhile to get going on offense, but by the end the team did a solid job on third downs, converting 8-for-16, a solid 50 percent. On the other side, the defense held the Bengals to just 3-for-11 on third down conversions, numbers that usually translate to winning. It seemed that the offense did a good job on first down to set up 2nd and 3rd and shorts that got converted, and when they didn’t Ben was able to make downfield plays to convert third downs as well. The D played better on third down than in the last few weeks, and it helped to force the Bengals into giving up the ball.

2. Ben Stepped Up When Needed the Most – While Le’Veon Bell was a beast for the run game, the Steelers don’t win this game if they don’t get the high level of play they did from Ben Roethlisberger. He became the first Steelers QB since Neil O’Donnell in 1995 to throw for over 300 yards in Cincinnati. Ben seemed to be off a bit early, but hit maybe the biggest throw of the season when he hit Martavis Bryant on a 94-yard go route for a TD that extended the lead to 35-21 and put the game away. If this team is going to win the division, they need Ben to play like he did in that three game stretch in October and like he did yesterday.

3. Time to Start Sitting Ike More? – Ike Taylor has been a big part of this defense for a long time, but yesterday he was a liability, allowing A.J. Green to make huge plays downfield, including an 81-yard TD on the final play of the third quarter that turned a 17-14 Steelers lead into a 21-17 Bengals advantage. Sure the Steelers rallied, but most of it came with Ike on the bench, sitting with a bruised knee according to Mike Tomlin. Whatever the case may be, with Taylor on the bench the Steelers didn’t allow a point, and backups
made plays and it allowed the offense to pile up points in the fourth quarter and get the win.

4. Now or Never – This team sits with three games to play, and in those three games they will take on the Falcons on the road, (5-7, playing tonight vs Green Bay) and then home games vs the Chiefs (7-6) and Bengals (8-4-1). Two wins over Atlanta and KC will set up what should be a game for the division title on December 28th, and it should also be flexed to the Sunday Night game, making it the spotlight game with it being a win or go-home game. If this team is going to be the inconsistent play of 2014 behind them and start playing their best football, they have to do it now, and it started right with a huge road win that showed they can beat a team on the road that won the division a year ago. They have everything in front of them – it’s on them now to get the job done.

5. Can Le’Veon Handle the Workload the Next 3 Weeks? – There’s no question that this teams success will lie in the hands and legs of Le’Veon Bell the next three weeks. As he goes, the team seems to go. He ran the ball 26 times Sunday, and the last two weeks before he ran the ball 54 times. With no veteran backup behind him, it’s him or nothing at this point, and he’s run the ball 242 times, putting up 5.1 yards per carry. The team needs to be somewhat careful not to run him into the ground, and if he can stay healthy, the team has a great shot at him going for the franchise record set by Barry Foster back in 1992.

Coach Mike Tomlin’s Post Game Comments After The Win Over the Bengals
Can The Pittsburgh Steelers Secondary Hold Up?