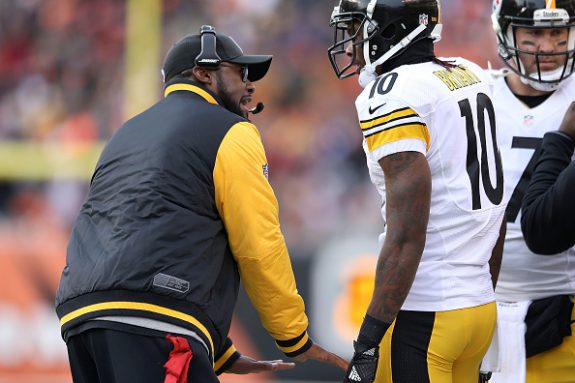 Coach Mike Tomlin: That was a tough AFC North December battle. Kind of what we anticipated. Give those guys credit. It seemed like every time we got control of it they got a big play and regained control of it. Also give our guys credit because they didn’t fold in the face of that, in a hostile environment today. The guys made the necessary plays. Not perfect, still giving up big plays. That created problems for us today; it’s created problems for us. I like the resolve of the group. We played as a team and we got it done. A lot to be excited about, but just very necessary. Hopefully we learn from these lessons and move forward to our next challenge. No real major injuries. Ike (Taylor) got beat up a little today, got a knee contusion, got an AC joint. The rest appeared to be pretty clean.

Re: The long touchdown pass to Martavis Bryant
We just weren’t going to live in our fears today. We needed to be aggressive. We needed to create some splash. It seems like we seized control of the game, they regained control of the game with a splash play. Going up top to 18 (AJ Green), so we just tried to do a little bit of that on our own. It worked out for us, good protection and great throw, and 10 (Bryant) finished it.

Do you weigh the risk and reward for that play?
Every moment of every day but that’s life, particularly in this league.

Did you see something leading up to make you think that play would work?
They are aggressive when you are backed up. They want to keep you backed up. That is football 101. I think that is any defense. Sometimes those opportunities are usually there but it’s about whether or not you are you willing to take the risk and are you capable of capitalizing on it. We were able to get it done today.

How hard is it for the defense to keep confidence when they give up big plays?
It’s less about the defense and more about the people. One of the things that’s positive about our group is we have some guys back there that have played some football like Troy (Polamalu) and Ike (Taylor), Mike Mitchell and Will Gay they’re not young people. They’re able to flush it out, move forward, and understand that the next snap is the most important one. It would be better if we minimized them.

Re: Ben Roethlisberger’s play today after the past couple of weeks
It was very necessary. It seems like he always plays good in Ohio. We knew what we needed today from everyone and he’s central to that.

How do Le’Veon Bell and Antonio Brown keep doing it?
I really think they get the headlines and stuff and deservedly so because they do a lot for us, but I also think that the other guys answer the bell when their numbers are called upon. Whether it’s Martavis Bryant or Markus Wheaton or Heath Miller or Lance Moore, it seems like the other guys batted a pretty good percentage when their number is called upon. I think that keeps a level playing field for those two key components to do what it is they do. Those guys answer the bell, make significant plays. They don’t have an opportunity to maybe have a volume of plays that Brown and Bell get but significant none the less because they keep the dogs off those two.

Why was it working so well on the left side running the ball?
I really wasn’t paying attention. (David) DeCastro is a pretty good puller. Other than that I didn’t pay a whole lot of attention to the direction of the runs.

After the AJ Green long touchdown, did you decide to stay with Ike?
I did, it’s on me.

How much did the fumble recovery by Arthur Moats swing the momentum?
It was a big play in the game. It was a huge play in the game. It was what we needed. A short field. Often times a short field alone doesn’t do it. It’s working together, working in concert with one another. We didn’t do a good enough job of it a week ago working in concert. We talked about it, offense, defense, special teams. That’s an example of us doing it today and allowing us to gain victory.

How pleasing was it to close a game out?
I don’t care about the style points, we are just trying to do what is necessary and get out of these stadiums with wins and stay in the thick of things. It was a significant day today here in the North.

If Le’Veon had less success earlier on, would we have seen more of Josh Harris?
No. We’re going to give it to Le’Veon.

Was Dri Archer hurt, was that why he wasn’t active?
It was the best mix for us today. We had some defenders coming back today. We got some significant special teams contributors. We didn’t want to lessen that. They have a dangerous kicking game. The net punting, the net punt return was really a field flipper. We wanted to respect that. They have dangerous return men in Tate and Jones. We allocated the bodies in that area