Can Shazier and Tuitt Take Steelers Defense To Another Level 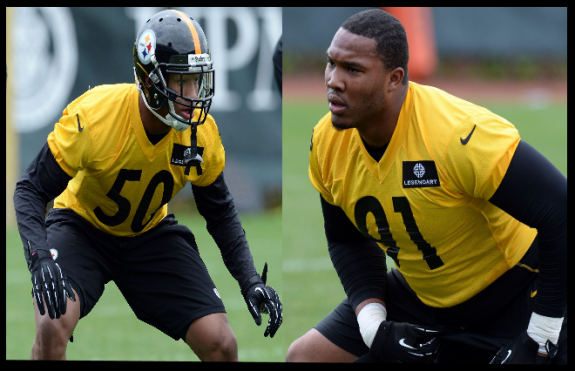 When Ryan Shazier and Stephon Tuitt were drafted in the first and second round of the 2014 NFL draft respectively, both were projected to be day-one starters shortly after they drafted. With the Pittsburgh Steelers in the midst of a playoff push, the question remains whether Shazier and Tuitt can help transform the Steelers defense from a “good” to “great” defense.

The Steelers are undefeated when Tuitt starts. Tuitt has yet to record a sack, but playing in a 3-4 defense, sacks are hard to come by at his position. After getting off to a slow start, Tuitt, over the past two weeks, has shown a knack for getting after and pressuring premier quarterbacks such as Andy Dalton and Matt Ryan. Most importantly, in Tuitt’s last two starts, the Steelers run defense has not allowed a 100-yard rusher. If that trend continues, it will aid a secondary dealing with injuries and size disadvantages. Tuitt will face a tough test against running back Jamaal Charles who accelerates in between tackles and outside the tackles as well. Tuitt will have a hard time getting after quarterback Alex Smith this Sunday due to the fact Smith gets rid of the football quickly and utilizes many short passes. The positivity to that is Tuitt will have more more chances to bat down passes at the line of scrimmage and  bump tight end Travis Kelce at the line of scrimmage, disturbing the timing between Kelce and Smith.

Shazier has battled injuries a lot this season, but when healthy he has flashed his speed and quickness at times. Shazier was drafted in the first round because he was projected  to be able to hit and cover speed running backs and tight ends. Charles clearly has game-breaking speed, so Shazier’s recognition and agility will be tested Sunday. Shazier will likely be given chances to blitz up the middle to force Smith to throw off-target and toss predictable passes which could lead to interceptions and/or pick 6’s. Shazier will also be counted on to help out the secondary by covering the middle of the field along with Lawrence Timmons, allowing the corners and safeties stop the deep ball and sideline routes.

Shazier and Tuitt are showing great upside as the games have become more pressure packed. If Shazier and Tuitt have continued success, the defense could become a defense Steelers fans were used to back in the glory days.