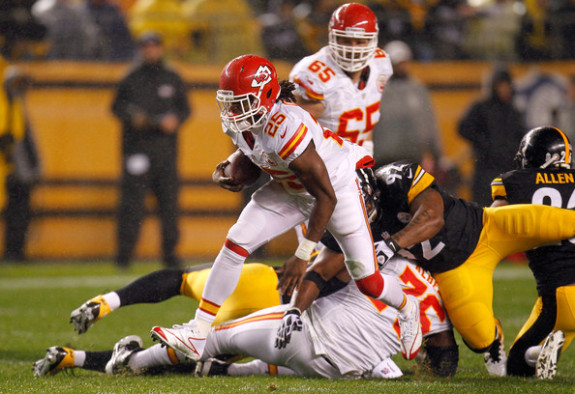 It’s no secret that the best offensive player for the Kansas City Chiefs is Jamaal Charles. Charles, who is once again closing in on another 1,000 yard rushing season, will be looking to carry his team into the playoffs. How will the Pittsburgh Steelers stop or at least contain him this Sunday?

Over the past two weeks, the Steelers have not allowed a single 100-yard rusher. Adjustments have been made, such as inserting rookie defensive end Stephon Tuitt into the starting lineup as he has brought a more physical presence to the defense.  Rookie middle linebacker Ryan Shazier was drafted in the first round for games like this. The speed of Shazier will be needed to stop Charles on sweeps, screens, and/or passes in the flat.  Nose tackles Steve McLendon and  rookie Daniel McCullers have held their own in the middle of the defensive line. Their efforts will be needed as well to help kep the Chiefs offense more predictable by forcing runs to the outside, allowing the linebackers free to chase down Charles in a limited area of the field. With over 2,000 yards receiving and 54 total touchdowns, Charles has proven if he does not have a big game running the football he can get it done by catching it as well.

A major weakness for the Chiefs offense is that their wide receivers have not caught a single touchdown pass this season.  This could make very well allow strong safety Troy Polamalu to play closer to the line of scrimmage at least 20-25 snaps. Charles possess great speed, meaning even if he is contained on 19 snaps, he can still hurt a defense on snap 20. This game will greatly help or hurt each teams’ playoff chances depending on who wins. The Steelers must be greatly motivated.

Last season, in week 17, Chiefs head coach Any Reid decided to rest his starters against the San Diego Chargers, giving the Chargers a huge advantage as they won a close game. This Sunday, the Steelers will be looking to crush the Chiefs’ playoff hopes without the help of any other team, unlike the situation in 2013.  If they contain Charles the entire game, it will greatly help their chances of forcing Kansas City to watch playoff football from their couches instead of playing football in January.

Post-Game Interviews From Steelers, Falcons
Can Shazier and Tuitt Take Steelers Defense To Another Level