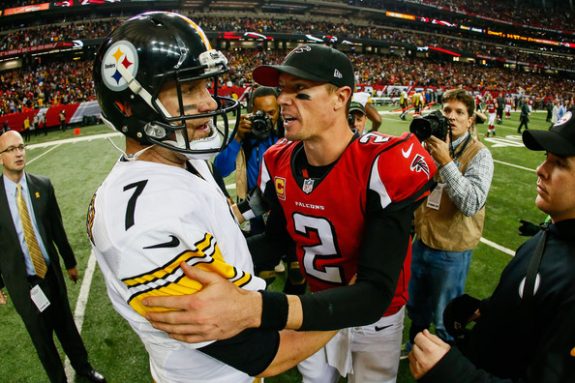 “Man that was a tough fought game, it took efforts obviously in all three  phases working together
offensively, defensively and kicking. But it wasn’t an easy undertaking by any stretch. I tip my cap to the
Atlanta Falcons, they did a great job of neutralizing our running game, although we were able to run it in
the significant moments. In the short yardage and goal line we were efficient in that area but 1st and 10,
2nd and medium I thought they did a great job but largely I thought in all three phases we did what was
necessary in  a tough environment. I  would be remiss if I didn’t mention  Steeler  Nation. They were
special in the building today, just love and appreciate the support that we get from our fans on the road,
we are used to seeing it but it never gets old, we really appreciate it. ”
On the defense making plays when it had to:
“We fought in a big way, defensively. I thought we did a good job of keeping a lid on it that prevented
some of the big plays that have hurt us in the past. Obviously, they created some big plays with some
shorter passes but that is life. We are who we are and we are not a perfect group by any stretch but we
will fight the fight until the end together.”
How much offense was created or based on what they gave you:
“We did largely did what we wanted to do other than obviously the effective 1st and 10, 2nd and medium
open grass running. They did a nice job of minimizing our on schedule running game.”
Thoughts on Antonio Brown’s catch on the sideline:
“I thought he got in on time but it was under two minutes so I didn’t have the ability to check. But I did
assume they would get that correct. Antonio is the best in the world at that, we see it every day.”
WR Markus Wheaton’s big catches on 3rd down:
“Not only him but all of the guys. We talked about it. Antonio Brown gets a lot of recognition, RB
Le’Veon Bell gets a lot of recognition, but those guys are able to do what they do because when other
guys are called upon, deliver. Whether it’s Wheaton, WR Martavis Bryant, we have a nice group of
complimentary  guys  that  don’t  get  a  lot  of  volume  in  terms  of  opportunity  but  when  they  get  the
opportunity they deliver.
Following sequence where you answered right back:
“It was big. I feel comfortable when we are in our two minute specifically before the half. We have had
success with it and it is significant to get the seven as opposed to the three, the guys did a nice job.”
Play of CB William Gay:
“Will has been around a long time. He is one of those savvy veteran guys more than anything, he does a
great job of staying on script. When he picks the ball off he hits the near sideline, he has good grip, good
ball security, he runs out of real estate, he is willing to cut it back, he doesn’t make things up, he stays to
script so the guys that are blocking for him know where he is going to be. And I think that allows us to
work together to maximize the opportunity.”

On the play of the wide receivers today especially the young ones:
“I’m really proud of Markus (Wheaton) tonight.  He made a couple of big plays, a couple of third down
catches.  But that’s the work that he puts in.  You see him in practice, film, things like that.  He will
always come and talk with me to see what I want.  He put some good stuff on tape today.  I thought that
10 (Martavis Bryant) did some stuff as well and you always know what you will get from A.B. (Antonio
Brown).”
Does it feel good to secure a winning season:
“Yes. It is just another win along the way. We have to get hot at the right time.  We came in and played a
very good football team. We are happy to get the win and will enjoy it for a little bit but then get ready
for two home games.”
How tangible is momentum with this team right now:
“It’s huge.  The first Super Bowl that we won we were a team that got hot at the right time.  We went in
as a six seed and just played good football and that is what this League is all about. If you get hot and
play your best football at the right time then you are a dangerous football team. I don’t know if we are
there yet, but we got a win and are happy about it.”

On his third interception return for touchdown on the season:
“I’m just glad we got the win. That was a big win against a division leader. That’s something that you try
to get in December football. We’re trying to stack wins. Playing against good opponents and just putting
everything on the line.”

“Like all of you that watched the game today, we felt like we had lots of chances to have a different
outcome. We have to take advantage of the opportunities that we have in all three phases. I think that
we normally have been a very good team in the red zone, and we were not able to convert and score
touchdowns there. When you do that you put yourself behind the eight?ball when you’re playing a good
football team like the Pittsburgh Steelers. Overall, we didn’t play well enough to win the ball game.
Consistency throughout is something that we’re still striving for as a team. We will move on to New
Orleans, and get prepared for a very interesting two weeks, not only in the NFC South, and for the
people here in Atlanta, but for the people around the NFL.”

On Roddy White and his record breaking performance:
“Well, Roddy White has been a great player. He’s a very good teammate. He’s about as passionate a
football player that I’ve ever been around. He hates to lose, and when you have guys like that on your
football team you’re going to win a lot of football games, and since we’ve been here we’ve won a
number of football games. Roddy’s helped us do that, not only by his plays on the field, but by how he
responds to what we do in practice and how we prepare.”

On what may have been the reason for a slow start:
“Not talking about last week, talking about this week, we didn’t really get started the way we wanted to.
We had an opportunity early on and just missed on a couple. We continued to battle back. I think
offensively  it  comes  down  to  a  couple  things,  you  can’t  turn  the  football  over  and  when  you  have
opportunities in the red zone, you’ve got to put it in the end zone. We didn’t do a good enough job of
that today.”

On what happened on the interception:
“It was just kind of a tough play. I let it go and certainly a decision you can’t make. I can’t do that. It
stops there.”
On the different kind of coverages the Steelers played:
“We kind of knew what they were doing. They brought pressure on the side with (Troy) Polamalu. The
way that they played the coverage was a little unique. Again, I’ve just got to do a better job than that.”

On the loss:
“We came up short again. It was a close game. It’s tough right now. We’ve got to find a way to win close
games. Fortunately, with our situation, we still control our destiny and next week is going to be a big
game for us. It’s a must win and a chance to fight and see who will be #1 in our division. We’re going
against a great team this week and like always, we’ve got to prepare for it and hopefully we’ll come out
with a W.”