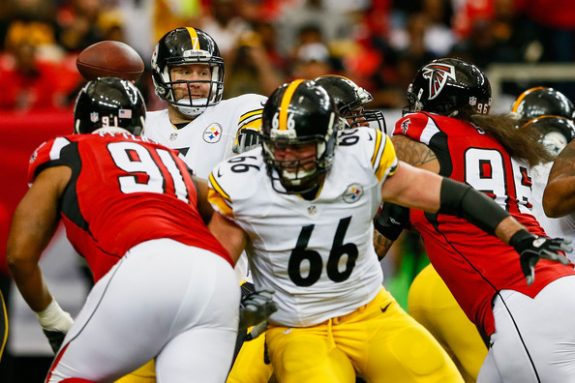 The Pittsburgh Steelers offensive line, the ‘big boys’ up front, played extremely on the road in a hostile environment.  The Atlanta Falcons are known for getting pressure and and being very difficult to beat at home. But, Kelvin Beachum, Ramon Foster, Maurkice Pouncey, David DeCastro, and Michael Adams collectively kept Ben Roethlisberger upright and his jersey white during the entire game.

The Steelers’ offensive line only allowed one sack and led the way to a 398-yard offensive performance.  Le’Veon Bell only had 47 yards rushing, but the offensive line gave Roethlisberger enough time to find Bell for 72 yards receiving and two rushing touchdowns.  Over the past several weeks, the offensive linemen have been efficient in blocking for extra seconds, allowing Ben to find Martavis Bryant, Antonio Brown and Markus Wheaton down the field, and tight end Health Miller on delayed routes.

The offensive line has progressed this season to the point in which each player has shown the ability to get to the second level in the defense on counter runs, sweeps, and screens pass plays as well.  Backups such as Adams, and Cody Wallace have both played as if they were 16-game starters when called upon. Moving forward, the formula is simple.  If the Steelers’ offensive line continues to give Roethlisberger time to throw and holes for Bell to run through, the Steelers will continue to win.