Steelers: Haley and Butler on extra time to prepare for Chargers 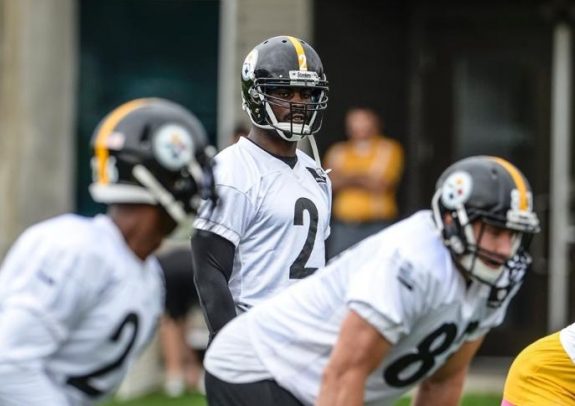 The Pittsburgh Steelers have wasted none of the extra time they’ve had in preparing for the San Diego Chargers after a disappointing overtime loss to the Baltimore Ravens.  After practice, coordinators Todd Haley and Keith Butler talked about how the team prepared for their opponents in week five and where they feel the team is headed.

Keith Butler: “You either win or lose, and that’s all that counts”

Re: Whether linebacker Ryan Shazier can play this week

“I don’t know.  He is practicing right now.  He is moving around good.  We will have to wait and see in the next couple of days if his shoulder is still bothering him.”

“What I saw when (Ross) got here, the thing I was most impressed with was that he would always jump up,” said Butler.  “When they were doing one-on-ones with receivers he would always try to jump up and take Antonio Brown.  That showed me the kid had confidence.”  Butler added that Cockrell has improved week to week, leaving little doubt that Cockrell has showed he is ready to take a starters roll on defense.

Re: Antonio Gates’ return to the Chargers lineup

“I don’t know if they will play three receivers or come out with (Gates) and play what we call ‘Ace’, which is two tight ends and two wide receivers,” Butler said.  Butler said that if Gates were with the Steelers, they would be trying to get him the ball as much as possible, and he anticipates San Diego will do the same.  “He does a great job of using his basketball skills to be a tight end/receiver in that he can body you up and move in front of you…you can’t get to the ball,” said Butler.  “He is a very competitive guy, a guy that has a lot of pride in the way he plays.”

Re: Pairing Shazier with Gates and how to defend against him

“(Shazier) puts a little bit more speed on the field for us,” said Butler.  “Most of the time speed is the winner.  But we will see what happens with him.  Sean Spence has done a good job for us…Vince Williams has come in on occasion.  Both of those guys…they are very smart football players.  If you know the game well enough, you try to keep yourself out of positions that are going to hurt you or the defense, and those guys are starting to learn the defense well enough to be able to do that.”

“He knows the game very well,” Butler said of Rivers.  “He’s been in the league a long time.  He and Ben Roethlisberger, as you all know, were drafted the same year…Philip’s dad is a high school coach.  He kind of grew up in football…It’s going to be a challenge for us to try to reel him in on some stuff.”

Todd Haley: “Having an extra day this week [was] huge”

Re: Getting Mike Vick more reps

“As I said last week, it was a tough deal for a guy who hasn’t had a lot of reps at all, period,” said Haley.  “Actual, meaningful, Pittsburgh Steelers reps that is.  So, to be able to be out here and make calls in the huddle, from an operational standpoint for him, his comfort level of what the words mean and what they mean to him.  All of those things are so, so important.”

Re: Using Le’Veon Bell over DeAngelo Williams or utilizing both

“We have two really good backs and they both have a different skill set, so to speak.  Again, depending on the game plan and where we are from a situational standpoint, things have just fallen that way [that Williams was not utilized more].  But, we’re definitely excited about having (Williams) here and he’s excited to be here.”

Re: Whether Bell lets the coaching staff know when he needs a break

“No, because he never wants to come out. So, it’s the head coach, me, Coach Saxon and we are all kind of in the same bind at times.”

Re: Whether players on offense had to adjust to Vick being left-handed

“I definitely think it is different catching a ball from a right-handed quarterback than a left-handed quarterback,” Haley said.  “The spin, the tilt of the football…again, it’s like breaking any other habit, or getting used to anything else.  It takes time and repetitions…all of those things are just priceless, as far as getting ready to go out there in the heat of battle and competing together.”