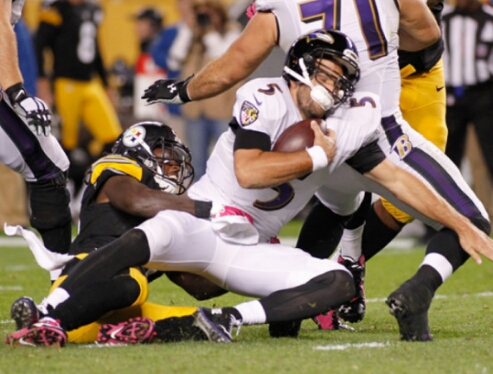 The Steelers’ 23-20 loss to the Baltimore Ravens on Thursday night was a team loss, no doubt, but one the Steelers defense doesn’t deserve to have hung on their shoulder pads.  In fact, after weeks of hearing how poorly they have performed, the Steelers “D” was about the only solid aspect of the team during the game.

Did they tire? Sure, after three quarters of devastating hits on trash-talking Steve Smith, sacking “elite” quarterback Joe Flacco five times and dragging Justin Forsett to the turf.  Lawrence Timmons and Antwon Blake hit Smith so hard that, after the game, he put Mike Mitchell on his “permanent hit list” – must have hit his head as well as gotten a sore back.  Mitchell’s lick was nowhere near the spearing Smith claimed it was, or could have been. In fact, spearing was not even an accurate description.

Flacco looked flustered for the better part of three quarters, throwing a lame-duck toss that Ross Cockrell (no sign of Cortez Allen) easily picked.  Had his teammates all seen it, Cockrell may have had the blocking he needed to take the INT to the house.  Guess he caught everyone off guard.  Cockrell had another great play, keeping his toes inbounds when Cam Heyward strip-sacked Flacco.  Five sacks.  Line up James Harrison, Sean Spence, Timmons, Heyward up and give them each a game ball just for veteran leadership.  This defense showed more pop against the Ravens than they had mustered in weeks.

Stephon Tuitt has shown a ton of heart in the last couple of games. His improvement is impressive and he spent plenty of time in the Ravens’ offensive backfield.  Key in helping stop the run, Tuitt has benefitted from playing next to Heyward.  It shows.

Will Allen and William Gay may not be your favorite guys in the backfield, but they showed they were ready for a fight.  Add Mitchell and Antwon Blake to that mix and there are a lot of guys who wore purple on Thursday night that are gonna have plenty of that color on their bodies on Friday.

They made some mistakes, this defense NFL experts were predicting to drag down and unstoppable offense.  I’m not saying the Super Bowl legends in the Hall are being replaced right now, but the guys in Steelers jerseys held their own against an overmatched Baltimore squad minus a few plays here and there.

Kudos to Keith Butler, Joey Porter and Carnell Lake for actually prepping for this game and putting the boom back into their squads.

Of all the guys in the locker room who should be upset, this defense deserves to be completely livid.  They forced three-and-outs only to watch the offense sputter. They created turnovers to watch them be wasted by missed field goals and a lack of scoring.

There is plenty of finger pointing to be done, but no one should be sticking those fingers in the chests of the defense.  Time for some reality, here.

Todd Haley and Mike Tomlin put all their eggs into Big Ben’s basket. The guy is tough as nails, not bulletproof.  Then they throw Mike Vick to the dogs by limiting the things they said they were catering to – his ability to use his legs, utilize play action and throw the ball.  I love that Le’Veon Bell put up over 100 rushing yards, but DeAngelo Williams’ talents were wasted.  The Steelers had multiple opportunities to throw Williams in for short yardage situations and help Bell out.  He could have been used as a lead blocker.  Miller plus Williams in front of Bell in overtime sure as heck would have been better than what was sent out to the huddle.

Josh Scobee had better make sure he went to each guy on his defense and apologized or risk their wrath come meeting time.  They deserved the win and were robbed.  You think Harrison wouldn’t like to open-field tackle the “Jags’ leading scorer” right now?  I’m not advocating that the locker room errupt into random acts of violence, but sincerity would be welcome.

Rant over, but giving this game to Harbaugh and his team with a bow on top is disgusting.  And for this Steelers defense, frankly offensive.  They worked their butts off to get pegged as losers – what they’ve been working so hard to disprove.

I can’t imagine what Troy Polamalu, Brett Kiesel, Mean Joe…heck, Jerome Bettis thought of this game.  That bad taste, it’s that the Steelers are literally having to eat crow.  Disappointing, disturbing, disgusting.

Steelers Blow 20-7 Lead; Lose in Overtime to Ravens 23-20
Between the Hashmarks: Can Martavis Bryant Get Back In Good Graces With Steelers, Self?