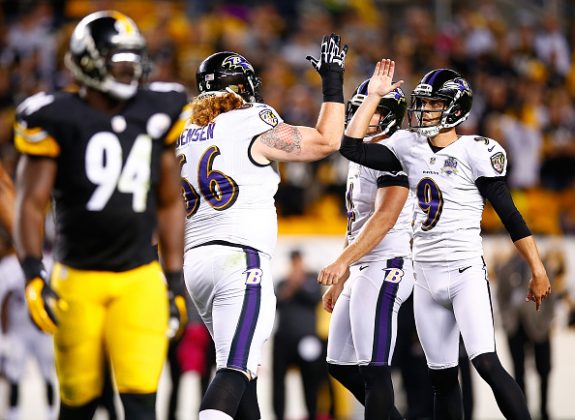 The Steelers had more opportunities to win Thursday night that one could count, but in the end couldn’t finish in their first game without Ben Roethlisberger, and suffered one of their toughest losses in recent memory, losing to the Ravens in overtime 23-20.

Ravens kicker Justin Tucker hit a 52-yard field goal with 5:08 to play in overtime to give Baltimore their first win of the season against three losses.

The Steelers loss drops them to 2-2 on the season.

Pittsburgh very well may be looking for a new kicker following the loss, as once again Josh Scobee was awful, missing a pair of field goals from 49 and 41 yards.

The second field goal would have given the Steelers a 23-17 lead with with about a minute to play, and would have forced the Ravens to go for a touchdown instead of just needing a field goal.

Instead after the second miss the Ravens were able to drive down the field to get Tucker in field goal range to hit a game-tying field goal to send the game in overtime.

In the OT, the Steelers clearly didn’t want to give Scobee another shot, as they went fort on two fourth downs, both of which were on the Baltimore side of the field.

The second guessing will start with why Le’Veon Bell, who ran for 122 yards on 29 carries, a 5.9 yards per carry rush, didn’t get a shot on the 4th-and-1 in overtime to run the ball.

Bell had a 22-yard run to start the drive and set the Steelers up with what could have been the winning score. Instead they turned the ball over four plays later, and Flacco was able to drive the Ravens down for the winning field goal.

Justin Forsett ran for 150 yards on 27 carries for Baltimore. Flacco was 20-for-33 for 189 yards with a touchdown and an interception.

The Steelers offense put up just 263 yards, but built a 20-7 lead after Vick hit Darrius Heyward-Bey with a 9-yard touchdown five minutes into the third quarter after a Flacco fumble.

Flacco and the Ravens responded right away, driving down the field and the QB hit Kamar Aiken with a 15-yard touchdown to make it a 20-14 game.

The Steelers special teams held on a fake field goal, and also held on a pair of fourth downs, but were unable to stop the Ravens when it mattered the most.

A week from Monday the Steelers will go on the road to play the Chargers in San Diego.