Steelers a Perfect 3-0 in Postseason Against Ravens 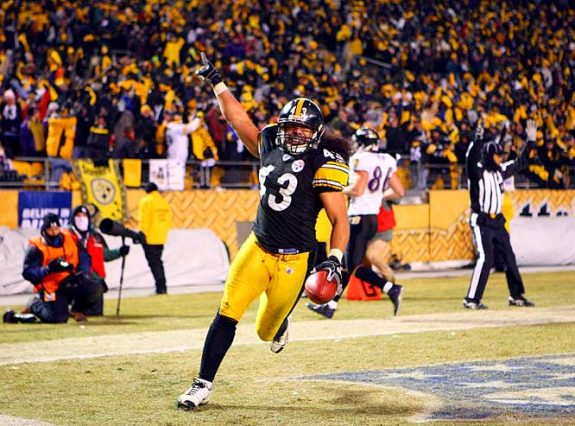 In 2001, 2008, and 2010, the Black and Gold knocked the Ravens out of the Super Bowl chase, and will have a shot to do the same Saturday night in the two teams third meeting of the season.

Here’s a quick look back at the three playoff meetings between the two clubs.

Without an injured Jerome Bettis, the Steelers used a solid defensive effort and a fast start to knock out the defending Super Bowl Champion Ravens. The Steelers D held the Ravens to 150 yards and 7 first downs, forced 4 turnovers, and recorded 3 sacks. The black and gold jumped to a 20-0 led with four minutes left in the first half, and cruised, pounding Ravens QB Elvis Grbac.

With the win the Steelers advanced to the AFC Title Game, where they lost to the Patriots 24-17 after Kordell Stewart threw some awful late picks that stopped the Steelers from going to the Super Bowl.

The two teams had two memorable games already in 2008, and this AFC Title game took the cake, as it was a physical affair in which the Steelers again jumped to a 13-0 lead thanks to a great play by Ben Roethlisberger, who hit a 65-yard touchdown pass to Santonio Holmes. Baltimore closed the game to 13-7 at the half, and had the Steelers on the ropes in the fourth quarter, down 16-14 but with the ball on their own 14 with just about 6 minutes left.

That’s when Troy Polamalu made the play of the game, picking off Flacco and returning it for a touchdown to clinch the game and help the Steelers advance to Super Bowl XLIII, where they topped the Cardinals.

The most recent playoff meeting saw the Ravens jump out to a 21-7 halftime lead, but the Steelers rallied, using a fumble and interception to draw even with the Ravens in the second half. The defense for the Steelers also lowered the boom on Joe Flacco, and

The play everyone seems to remember is the 3rd and 19 late in the game, when Ben Roethlisberger (226 yards and two touchdowns), threw long and hit rookie Antonio Brown with a 58-yard pass to set up Rashard Mendenhall’s one-yard TD with less than two minutes to go for the win. The Ravens put up just 28 offensive yards in the second half.