Steelers Trio of Gay, Blake and McCain Primed for Playoffs 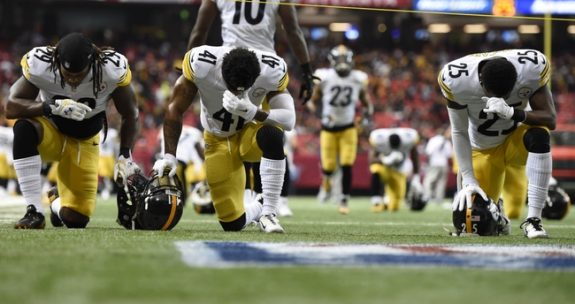 The trio of William Gay, Antwon Blake, and Brice McCain in the Pittsburgh Steelers defensive secondary has surprised many the past few weeks. On paper, none of these cornerbacks are physically imposing or possess great athleticism.  But, with their recent success together, the question remains whether they can continue to play well in the playoffs.  If they play together at their current level, the trio looks primed for playoff heroics.

Brice McCain stands at 5’9″ and weighs 187 pounds. The corner  signed with Steelers after being released by the Houston Texans in the offseason and was not considered a big free agent signing. Initially buried on the depth chart behind Ike Taylor and Cortez Allen, in close competition with rookie Shaquille Richardson (before Richardson’s injury), it’s safe to say the future did not look so bright for McCain.  With injuries and poor performance from others, McCain steeped into the starting lineup after the first month and half of the regular season and has held his own against star wide receivers such as T.Y. Hilton, Torrey Smith, Steve Smith, Roddy White, and A.J. Green.  McCain intercepted two passes Sunday night against the Cincinnati Bengals that allowed the Steelers to not trail once in the game.

As the season has gone on, McCain has improved in zone coverage; not allowing any wide receiver to beat him deep.  In the playoffs, the Steelers will lean heavily on McCain to not allow big plays even though teams will look to test him in the red zone because of his lack of height as well as down field due to him lacking 4.3 speed.  McCain has shown he has good hands and is not afraid to play the ball aggressively in front of him or in the air.

Antwon Blake was scarcely talked about in the offseason or beginning of the season.  At 5’9, 198 pounds, Blake went undrafted out of the University of  the Texas El Paso (UTEP). If one word can be used to describe Blake it would be “feisty”.  Blake is not afraid to be physical with any wide receiver regardless of size and speed. In week 14, when Blake replaced struggling cornerback Ike Taylor late in the second half, the defense improved because of Blake’s aggressiveness on star wide receiver A.J. Green and the defense held the Cincinnati Bengals  offense scoreless for the rest of that game. The Steelers went on to win and clearly it was a turning point for the Steelers.

Blake has shown he can cover wide receivers deep down the field without much safety help, which is vital considering the fact that Troy Polamalu is not the same player he once was due to age and injury.  Mike Mitchell has had his own moments of weakness at the safety position.  Blake has also shown the quickness to keep up with wide receivers on screens, slants and quick out-routes. Blake is not known as a shutdown corner, but so far he has done an excellent job of keeping recievers in front of him in the 0-15 yard range, giving him many opportunities  to make a play on the football through interception, forced fumble, or pass break up

William Gay has become Mr. “Pick Six” this season.  Gay has been the steady presence among all of the cornerbacks.  Not known for being very flashy, Gay has led by example this season.  Whether it be from his excellent technique, his aggressiveness, his sure tackling ability, or even his personality on and off the field, the veteran has rubbed off on McCain and Blake.  All three are playing with a chip on their shoulder. Gay has proven you do not have to possess great speed to cover deep threats and quick wide receivers as long as you understand how to read routes and  properly react. Gay will be looked upon in the playoffs to lead even more considering the fact that he is the only cornerback on the roster outside of Taylor with a Super Bowl victory.

Steelers a Perfect 3-0 in Postseason Against Ravens
Steelers defense: Front seven look to lead in playoffs