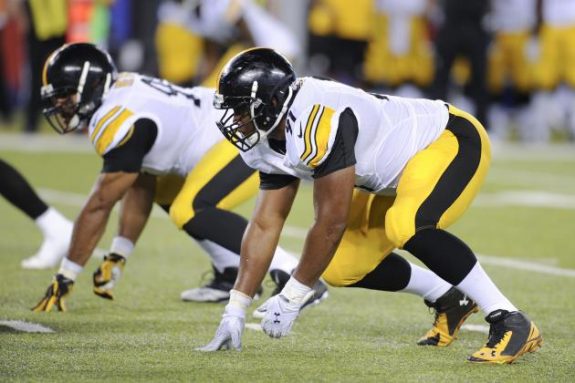 The Pittsburgh Steelers’ defensive front seven has made major strides in the month of December. The combination of young and experienced players have caused opposing offenses to struggle over the past month.  The Steelers defense is primed, but it is the front seven that look to lead in the 2014 NFL playoffs.

Beginning to break down the front seven, we’re looking at the defensive line.

The Steelers have two emerging young defensive ends in Cameron Heyward and Stephon Tuitt. Heyward has proven this season to be a force as a pass-rusher even while being double-teamed multiple times in the 3-4 defense. His 7.5 sack total speaks for itself and this Sunday night, Heyward’s ability to pressure quarterback Joe Flacco could allow the Steelers defense to drop an extra linebacker in coverage more often. Tuitt is not the polished pass-rusher that Heyward is, but possesses great strength.  Since being inserted into the starting lineup again in week 14, the Steelers are undefeated as he has brought a high level of toughness to the defense. His presence on the field has allowed outside linebackers James Harrison and Jarvis Jones to recieve more one-on-one matchups in pass rushing situations.

Defensive tackle Steve McLendon has had moments of excellence this season. McLendon, who possesses more quickness than the average nose tackle, has held his own in the run game in the past few weeks.  His improvement has aided linebackers Ryan Shazier, Sean Spence and Vince Williams in the run defense game. This Saturday night, versus the Ravens, containment of running back Justin Forsett with strong defensive line play will limit play action from Joe Flacco and prevent the Baltimore offense from gaining many yards via underneath passes to quick wide receivers and tight end Owen Daniels.

Concerning the pass rush from the linebackers:

Jason Worlids and Harrison have stepped up for sure, causing quarterbacks to dump the ball off more often. Shazier and Lawrence Timmons clearly have the speed to rush up the middle, creating havoc as well, and hopefully they will get the chance to blitz more often.  Flacco is not a mobile quarterback, so the Steelers defense know where he will be when dropping back to pass. Collapsing the pocket will force Flacco to throw the ball away or force throws into coverage. With Flacco looking to throw the ball deep, it will benefit the defensive front seven well to pressure the Ravens quarterback three seconds or less after the football is snapped to prevent  the time he needs to throw deep.

With the way the Steelers offense is clicking, a few forced turnovers by the defense could give the team 2-3 extra offensive possessions to score 10-17 points – which could decide the game.