First-Round Linebackers Have to Stay on the Field 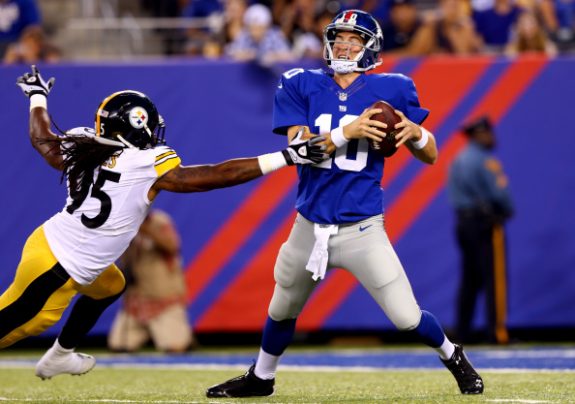 We need to see more. The Steelers spent their last two first-round draft picks on linebackers who are supposed to carry on the legacy of those who came before them. But before Jarvis Jones and Ryan Shazier can begin to evoke memories of the many legendary – not to mention productive – linebackers who have worn the black and gold over the years, they have to find a way to stay on the field.

Between them, Jones and Shazier were active for 16 games this season. Jones dressed for just seven games thanks to a dislocated wrist. He started three games and collected 18 total tackles, two sacks and a forced fumble. Shazier was active for nine games (five of which he started). He racked up 36 total tackles – 24 of them solo – and knocked down one pass. The rest of Shazier’s rookie campaign was lost to groin and knee injuries.

Being a second-year player in 2014, Jones offers a larger sample size when it comes to evaluation. In 2013, he started eight of the 14 games in which he dressed. His 40 tackles (30 solo) and four passes defensed are hopefully more representative of the type of production he’s capable of providing. What’s troubling is that Jones only tallied one sack in 2013. Three sacks in two seasons from a 3-4 outside linebacker is not enough.

Fair or not, the careers of first-round picks come with a truckload of expectations. Add to that the fact that Jones and Shazier both happen to be part of a positional group that has been the linchpin of the Steelers defense for the past five decades, and these two young men are fighting quite an uphill battle before they even step between the white lines.

But that’s where Jones and Shazier need to be – on the field. We need to see a full season from both of them before we pass judgment on whether their first-round selections will go down in Steelers history as more Lawrence Timmons and less Huey Richardson.