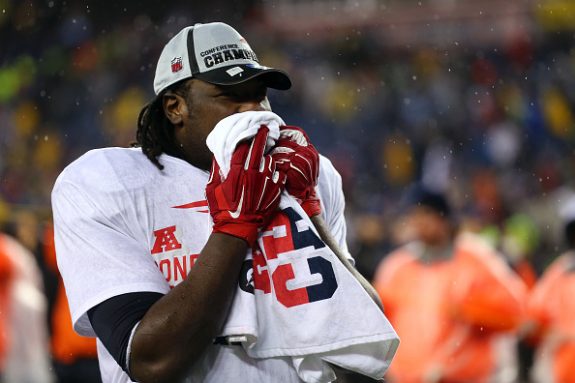 Anyone else upset today watching the Patriots move on to the Super Bowl while the Steelers are already busy planning the offseason?

Part of the big reason the Pats are heading to Glendale to take on the Seahawks while the Steelers are home is running back Legarrette Blount, whose Steelers career will go down as nothing more than a complete disaster.

If you don’t remember, or maybe don’t want to remember, Blount was signed this offseason to be the backup for rising star Le’Veon Bell, and then basically walked out on the team during a game November 18th.

The team released him the next day, and in what felt more like a setup than anything, Blount was able to quickly land on the Patriots, a team he spent the last season with.

Blount ran 30 times for 148 yards and three touchdowns during the Pats dominating win over the Colts, and ran with a resolved sense of purpose, something he seemed to lack during his Steelers tenure.

Things with Blount didn’t start so well, as he and Bell were caught with marijuana before a preseason game with the Eagles. All seemed forgiven if he just would have been the back the Steelers felt they were getting, but in the end, he wound up more like a knucklehead than a pro back in the NFL.

Watching him push forward for extra yards in the AFC title game was tough to watch, as he was his posing after scoring three touchdowns.

Is it okay now? I hate you LeGarrette Blount. #Punk

Yeah, I guess. But in my mind as a person who bleeds black and gold – I feel it’s true.

Blount is clearly a selfish person, let’s not forget the incident that started his rep as a player that most teams would rather not have to deal with.

Yes, that was the start, but giving the devil his due, Bount took the opportunity to run to the Pats after his release from the Steelers, and has made the most of it.

With the Pats, Blount has run for 281 yards with a 4.7 average and three touchdowns. He will get a ton more exposure now that the Pats are set to play in the biggest game on earth in two weeks.

So today, it’s official – Blount pulled it off, he’s playing in the Super Bowl – it’s a tough pill to swallow, and Steeler fans should have some anger about it.

After all, if Blount would have been a better person in that locker room and a professional, we could be getting ready for an epic Super Bowl vs the Seahawks instead of ranting about hating Bount.

And if you don’t agree that the Steelers would be in the Super Bowl if Blount was still on the roster, I’m not the only one that disagrees with you on that issue.

Perhaps foolishly, but I believe Steelers are in Super Bowl if they hold onto LaGarrette's Blount.

Mitchell, Allen need to rebound in a big way
First-Round Linebackers Have to Stay on the Field