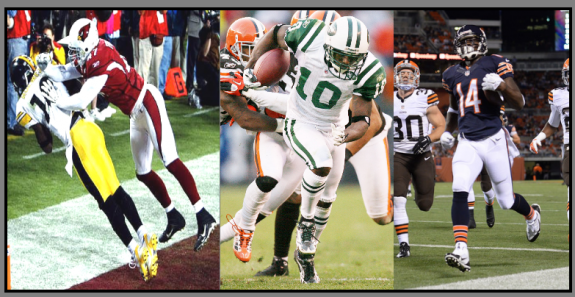 The many colors of receiver Santonio Holmes

On Monday, NFL receiver Santonio Holmes sat down with Sports Illustrated’s SI Now to talk about what is likely the end of his career in the league.  Holmes addressed his ‘bad boy’ image and expressed that he would like to return to the Pittsburgh Steelers in 2015 in order to have a “complete career”.  Although the Steelers released veteran receiver Lance Moore, it is questionable that the Steelers would bring Holmes back to Pittsburgh.

The Steelers drafted Holmes in the first round of the 2006 NFL Draft out of Ohio State.  It wasn’t until the 2008 postseason that Holmes made a real on-field statement after a fantastic end-zone catch in Super Bowl XLIII that earned him the MVP.  After the season, the Steelers traded Holmes to the New York Jets (2010) in exchange for a fifth round pick.  He was given a five-year extension with New York but was benched for an argument with a fellow teammate at the end of the 2011 season.  In 2012, Holmes suffered a lisfranc injury that ended his season.

During the disappointing 2006 season, Holmes was highly criticized for poor performance on special teams due to numerous fumbles.  After replacing Cedrick Wilson at receiver, Holmes finished the 2006 regular season with 49 receptions for 824 yards and two touchdowns.

Holmes started the 2007 season with the Steelers as the starting split end and led the team in receiving yards, receiving touchdowns and was considered a deep threat.   Holmes finished the season with 942 yards receiving and eight touchdowns.

The 2008 season looked like it would be an even better year for Holmes until he was arrested for possession of marijuana and subsequently benched by head coach Mike Tomlin twice.  His production declined and it wasn’t until Super Bowl XLIII that Holmes helped the Steelers secure their NFL-leading sixth Super Bowl win.

Due to brushes with the law, Holmes was traded to the New York Jets despite having 79 catches, 1,248 receiving yards and five touchdowns.
Holmes then spent time with the Chicago Bears (a one-year contract signed on August 16, 2014), but was waived on November 11 of the same year.

As a teenager in Belle Glade, Florida, Holmes admittedly sold drugs but stated his mother encouraged him to play football and get off the streets.  In May 2006, Holmes was arrested in Miami Beach, Florida for disorderly conduct which were dismissed after he paid a find.  Arrested a second time (June 18, 2006) for domestic violence and assault in Columbus, Ohio, Holmes developed a label of being a ‘bad boy’ in the NFL.  The charges were dropped in the case after Holmes’ girlfriend, the mother of Holmes’ daughter, pled for the prosecutor to do so.  Despite the prosecution’s refusal, the charges were later dropped.   In October 2008, Holmes was arrested in Pittsburgh for possession of marijuana and issued a statement expressing that he desired to “focus all of [his] efforts” on helping the Steelers win.

After being traded to the Jets, Holmes was again in legal troubles when Anshonae Mills filed a lawsuit against Holmes (March 24, 2010) alleging that Holmes threw a glass at her in an Orlando nightclub that resulted in a cut above her eye.  After Holmes issued a Twitter comment condemning the nightclub and a follower to “kill urself’, he went on to say it was time to “wake n bake” in reference to marijuana, but Holmes alleged his account was hacked.  In April of that same year, authorities at Pittsburgh International Airport received a report from a flight attendant that Holmes refused to turn off a mobile device which resulted in officers removing him from the flight.  Holmes met with then coach of the Jets, Rex Ryan, about the incident but was not charged with a crime.

“To get an opportunity to play for them again would be a complete career for me despite being traded and now with an opportunity to come back, I would love for nothing else but to finish my career with the Steelers. But that opportunity has to come from the man upstairs and the Rooneys.” – Santonio Holmes

Holmes cites in his interview (see video below) that he is a strong believer in second chances.  Unfortunately, Holmes has had several chances to show that he is past off-field incidents that affect his play on the field.  His performance over the past three seasons in the league have shown that the receiver continues to struggle with ball protection and isn’t as effective in making himself a top target.  His last full season (16 games played) was in 2011 when he recorded 51 receptions for 654 yards and eight touchdowns.

In light of his past, Holmes is facing a mountain of a climb to convince the Steelers organization that he can return to the team and keep himself out of trouble to play what would likely be the fourth wide receiver position.  The Steelers recently got rid of troubled rusher LeGarrette Blount and have a history of unloading players with off-field issues despite second chances (see Chris Rainey) even if they were playing in a top position.  With the Steelers cleaning house, Holmes would, at best, be allowed to training camp to compete for a spot – but even that is questionable unless he can show the franchise that he has something left in the gas tank that could give the Steelers a boost on offense or special teams. It is more likely that Holmes will be looking at retirement unless another team has a desperate need, and that offer may not come until after the regular season has begun and a player gets placed on the PUP list.