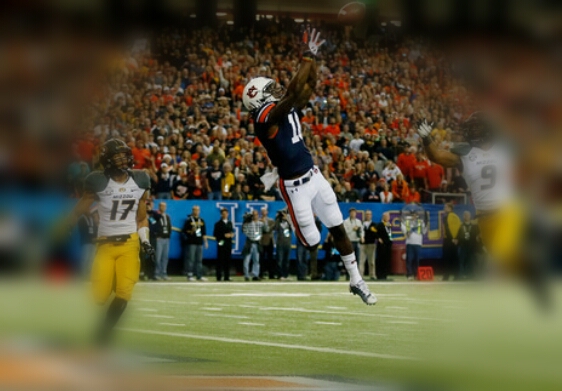 It came as little surprise that the Pittsburgh Steelers selected Auburn wide receiver Sammie Coates as their third-round selection.  Coates had been associated with the team during the 2015 NFL Scouting Combine and pro days.  Steelers receivers coach Richard Mann liked what he saw, making the choice easy when Coates was still on the board.

Coates has drawn comparisons to Steelers receiver Martavis Bryant, but the advantage is that Coates will bring more college play experience to the team than Bryant.  Mann said, “(Coates’) been at Auburn for his whole career, whereas Martavis (Bryant) came in from that prep school and only played on year…(Coates) has got a little more playing experience under his belt…”

Coates is a strong athlete at 6-1, 212 pounds and proved his athletic ability at the combine and in his college career.  Finishing with 82 receptions for 1,757 yards and 13 touchdowns (14 catches for 30-plus yards in 2013), Coates impressed Mann on tape with Mann being most impressed with contested balls.  “More times than not he came down with it,” Mann said.  “I’m talking about deep, contested catches, and that was impressive to me.”  Coates is expected to need work at training camp, but Mann isn’t concerned about his ability to improve.  “I think the sky is the limit for him,” said Mann.  “We think the ‘Z’ receiver has to be a guy who will catch and run with it.  He will put his pads down and run with good pad level.  A lot of guys won’t do that.  We’ve seen (Coates) do it, so we know he has it in him.”

Coates has the potential to be the red-zone threat the Steelers haven’t been able to create over the past two seasons. His size makes him a nice target for quarterback Ben Roethlisberger. Coates’ athletic ability is expected to propel him during camps ahead of the NFL regular season even as Mann coaches him on his route-running and ball awareness. Coates could immediately contribute on the hands team (special teams) as well.