Cover One: Breaking Down The Aftermath Of The 2015 Draft 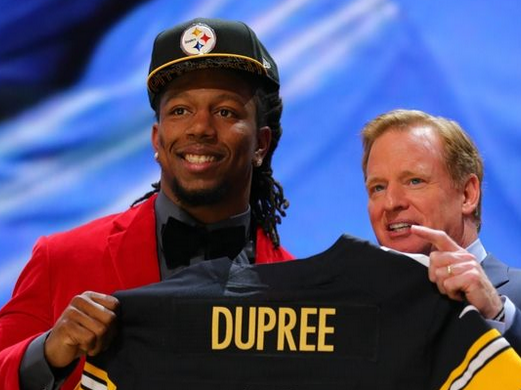 The NFL’s 2015 Draft has come and gone, leaving many fans exited and ready to see how quickly the rookies can produce. In this draft, the Pittsburgh Steelers drafted a lot of athleticism and upside, but some these players are seen as developmental/project players. With the dust now settled, it’s time to look into which positions and players that will be affected the most.

Starting with the first round pick Alvin “Bud” Dupree; he will challenge Jarvis Jones.  Jones showed some improvement last season but Dupree already seems to be a more developed pass rusher and stronger run defender then Jones. Also the size of Dupree allows him to play some defensive end. Jones, at the pro level, has not shown that he can play with his hand on the ground. Jones, though, understands the speed of the game, playbook  and plays with a non-stop motor.

When it comes to cornerback Senquez Golson and Doran Grant – both will both be counted on to bolster the special teams, and give quality snaps on defense especially on third and long. Golson will be in a training camp battle with Antwon Blake for the number three corner spot. Golson is the ideal corner to cover slot receivers with his quickness and ball skills.  Blake is a feisty cornerback who, last season, held his own against bigger receivers and can create some turnovers. Grant is very strong in run support, comes from a winning program, has just enough size to play on the outside cornerback position and has a nose for the football.

The fact that no running back was drafted signifies that the Steelers are willing to give Dri Archer another chance to prove himself. Archer will compete with  fellow second year player Josh Harris. Harris is the best pure runner between the two, but Archer offers more in return ability and break away speed. It will be one of the most heated battles in training camp because the guy who gets beat out will likely released from the football team.

Rookie tight end Jessie James will have a fighting chance to unseat veteran Matt Spaeth as the number two tight end. James is not a burner; neither is Spaeth.  Spaeth’s blocking skills right now gives him the edge but James offers more potential in receiving. It will be key for James to prove that he can block and catch on third down and in the red zone.

Last but not least we have the safety position to analyze. Shamarko Thomas will be in competition with interception-specialist Gerald Holliman. Thomas brings the physicality that Holliman doesn’t and Holliman brings the ball skills that Thomas is not known to have. It will be interesting to see which safety can improve the most on their weaknesses.