Will The Steelers Face a Brady-Less Patriots Opening Night? 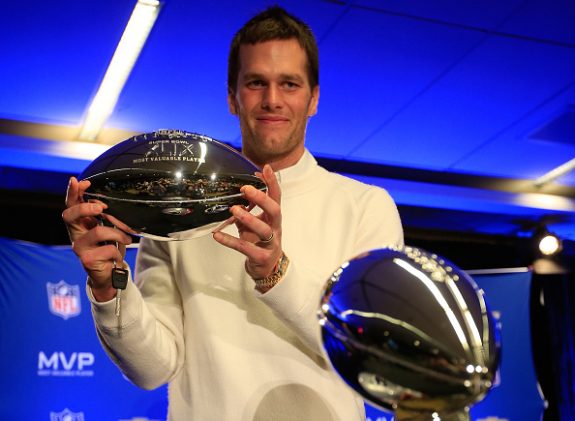 For the Steelers, it could be a dream come true.

Opening night, in Foxboro against the Super Bowl Champion New England Patriots – the Steelers defense lines up and face a Pats team missing one key part.

Yeah it’s a dream to most, but it’s a dream that is a lot more possible after Wednesday’s Wells Report was released stating that the Patriots violated league rules and that Brady, a four-time Super Bowl winner, was “at least generally aware of the inappropriate activities.”

Sounds like the QB should have to sit the bench. Shouldn’t it?

Patriots coach Bill Belichick vehemently denied knowledge of deflated footballs in January. The league mandates each ball fall within an inflation tolerance between 12½ and 13½ pounds per square inch.

So what will Roger Goodell and his league of merry men do about Brady and the Patriots when it (once again) comes to their cheating ways?

Pro Football Talk says that it’s almost unavoidable for Brady to avoid a suspension, meaning that when the Steelers take the field, they would be facing Pats backup QB Jimmy Garoppolo instead of Brady.

In a league that routinely suspends players for smoking marijuana and/or engaging in off-duty behavior that has no direct impact on the integrity of the playing of the game of football, how can the NFL not suspend Brady for his general awareness of the deflation scheme and for deliberately refusing to provide information that may have made his involvement even more obvious?

Garoppolo mind you has played in just six games in his career, and has thrown just 27 passes for 182 yards and one touchdown.

If Brady is on the field playing opening night – it shows once again that the NFL Commissioner plays favorites – and that can’t be tolerated.