Commentary: Steelers Defense Won’t Change Much Under Butler? Why Not? 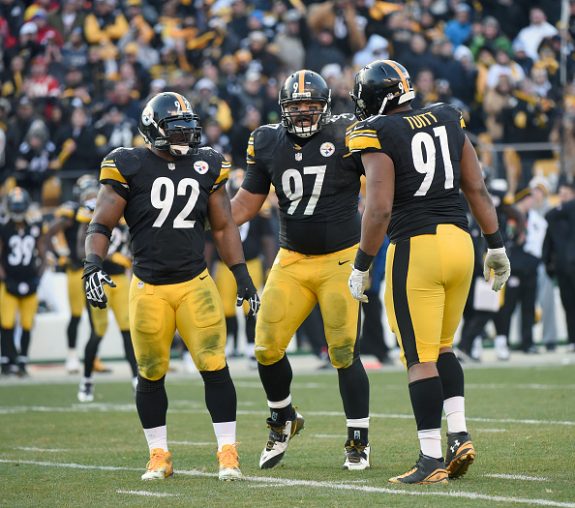 The talk of the recent few days among the Steelers and Steelers Nation is a quote from Cameron Heyward about how much the defense under new defensive coordinator Keith Butler won’t change much after the departure from Dick LeBeau.

Is that a good thing?

Let’s be honest, we’re not talking about the Steel Curtain or the even the Steelers dominant defense of 2008 that carried them to a Super Bowl victory over the Arizona Cardinals, based in part on a crazy 100-yard pick six by James Harrison.

This is a defense that the last couple of seasons has had a tendency to give up way too many big plays, miss tackles, and give up points at the worst times with the game on the line.

Last season the Steeelers defense was ranked 18th in the NFL, allowing 353.4 yards per game. But let’s not make many changes, we wouldn’t want to see them get better or anything.

They touted themselves as a ‘legendary’ defense, but in the end a costly mistake at the end of the Super Bowl cost them back-to-back titles.

Go back to 2008 when the Steelers defense was as good as any see in the last 15-20 years in the NFL. That season they gave up just 13.9 points per game, and when it came to yards, they allowed just 237.1 yards per game. Simply awesome.

Sure the players were different, but instead of holding on to the past and what Dick LeBeau installed, maybe it’s time for Butler to make changes, serious changes, to a unit that could use getting back to being dominant again.

They will have a much younger, and what should be a much faster defense when the season opens up barring injury, and with that they will have a number of young, hungry players that want to make a name for themselves, and will get the shot to do so.

The long term foundation under LeBeau was set once he came back in 1994, and the team thrived under it. Sadly the last few seasons the team had moments of being good on defense, but as a whole just never got to the championship level that they will again look to attain.

“I don’t think there are going to be too many changes,” said Heyward. “It’s going to be the same details. We will have a couple of new wrinkles, but we won’t share them now.

As for Heyward’s comments, let’s see if the ‘wrinkles’ he spoke of rings true, and if there’s a lot more of those under Butler, who will also look to form his own identity than what the Steelers defensive end is letting on to.