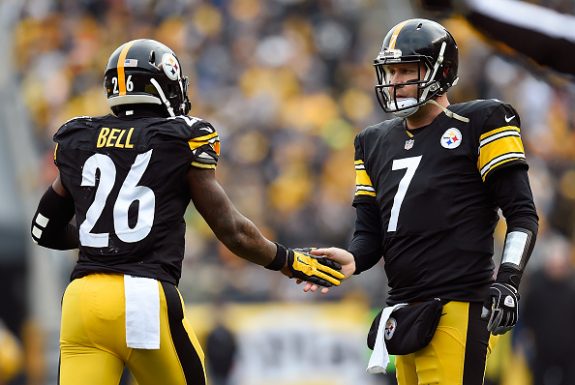 As the Steelers get set to embark on the 2015 season, the club will tout one of the best offenses in the NFL – if not the best if your listening to what Steelers QB Ben Roethlisberger has to say.

“I hate to say yes or no, because I don’t want to offend anybody else that’s been here,” said Roethlisberger after an OTA.

“But you look at stats from the NFL, we had the No. 1 wide receiver and the No. 1 overall back. Kind of hard to argue with those numbers.”

It was a record setting season in 2014 for the QB as well as his favorite two-some of WR Antonio Brown and RB Le’Veon Bell.

All Bell did was put up piles as yards, second in the NFL last season total in yards with 2,215 yards.

Brown hauled in an amazing 129 catches for 1698 yards and 13 touchdowns. Huge numbers that helped the Steelers dominate through the air.

It’s hard to think how this team will be better on offense, more so with Bell sitting out the first three games after a suspension.

Having rising stars like Martavis Bryant and Markus Wheaton will have to pick up the slack, and doing better inside the 20 will also be a key factor in how far this team can go.

For now, it should be an offense that could play with anyone in the NFL. They have some of the best playmakers in the game, and if they can stay on the same page, there’s no doubt the sky is the limit for this club.