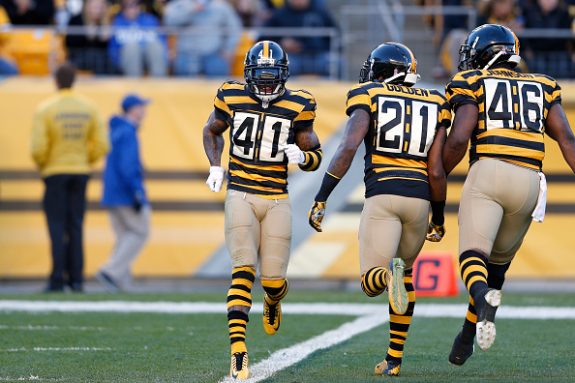 The Steelers “bumblebee” throwback jerseys are coming back in 2015 – as the team will wear the unis that some love, some hate, on November 1st at Heinz Field against the rival Cincinnati Bengals.

The jerseys made their debut in 2012 for the clubs 80th anniversary season. That season they worn them in home games against Washington and Baltimore.

Consisting of a black-and-gold striped jersey and socks, tan pants and a traditional black helmet, the old-school uniform also has a Pittsburgh city crest near the left shoulder of the jersey.

The player’s number is in a large black font against a white background on the chest.

The outfits are inspired by the uniforms of the original Steelers team, which was called the Pittsburgh Pirates back in the early 1930s.