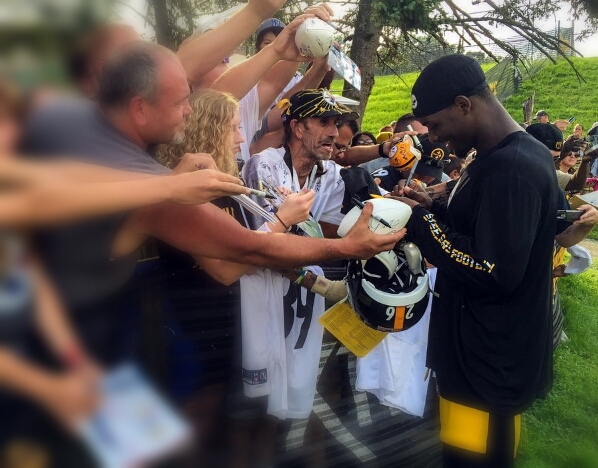 The Steelers participated in their first practices of training camp on Sunday without pads – a condition of the collective-bargaining agreement – in front of fans that surrounded the field in anticipation.  Before taking the field, Dan Rooney joined past players and older faces to kick off the 50 years in Latrobe celebration.

Once the celebrating wrapped up, it was time for the Steelers to get to work.  Here are four observations of the day’s activity:

Landry Jones didn’t look like he had made many adjustments in the offseason, making his remaining time with the Steelers look to be short.  Due to Bruce Gradkowski being placed on the PUP list, the Steelers rotated signal callers throughout drills.  Aside from Ben Roethlisberger getting his snaps, Tajh Boyd and Tyler Murphy also worked at the position.

Tomlin’s frustration boiled over during the 11-on-11 drills as Jones threw two interceptions; Alden Darby and Kevin Fogg grabbing the errant balls respectively.  At one point Tomlin yelled, “get rid of the ball!” as Jones hesitated, bringing the ball to his body before scrambling rather than shooting a pass.

Although Devin Gardner worked exclusively at wide receiver on Sunday, coach Mike Tomlin told the media at the end of the day’s activities that the intention is to continue rotating Gardner and Murphy between positions throughout camp. “We’re going to move those guys back between quarterback and wide receiver on some sort of a schedule,” said Tomlin.  “We’ll find a rhythm there.  The big thing is that we give them the opportunity to show what they’re capable of at both spots.”

When Tomlin was asked about Jones’ performance, he said, ” I haven’t evaluated him singularly.  We’re just getting started.”