Over 5000 Steelers Fans Ink Petition to Keep Vick Off Roster 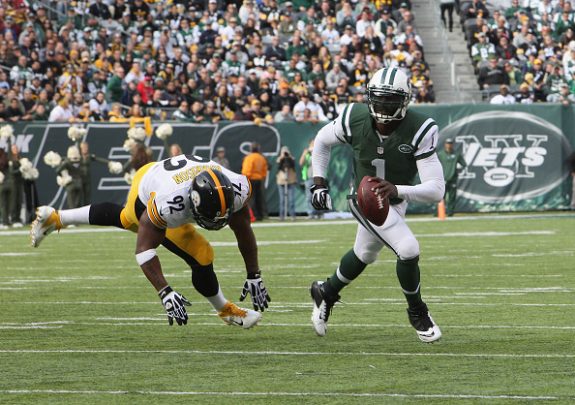 You knew that the signing of Michael Vick was going to draw fire to the Steelers – some of it positive and a lot of it negative.

The team inked Vick to a one-year deal on Tuesday to make him the backup to Ben Roethlisberger after usual second-string Bruce Gradkowski went down and was placed on IR with a dislocated finger.

The 35-year-old Vick spent time in prison for federal dog-fighting charges, and according to USA Today a petition was started to try and keep him off the Steelers (or probably any teams) roster.

Reports surfaced on Tuesday that Michael Vick was headed to Pittsburgh to meet with the Steelers about being the number two quarterback to Ben Rothelisburger after Bruce Gradkowski suffered a dislocated finger. Not too long after that, a Change.org petition was started to keep Vick off of the Steelers roster, referencing the 35-year-old veteran’s two-stretch in prison for federal dog-fighting charges.

“Michael Vick is a convicted felon and no-class piece of crap. He is also a terrible QB which is why he has no team. Let’s united as Steeler fans – as NFL fans – and stop him from playing on our team! Steelers fans united! Sign to keep Vick from ever wearing the coveted Steelers uniform!!”

Just hours after its inception, nearly 5,000 Steelers fans, suddenly concerned with the character of one of their quarterbacks, signed it.

Those in the corner of the Steelers say that ‘the past is the past’ and Vick should be allowed to play again and he’s not been in any trouble since the prison term.

Others say that the Steelers should not deal with anyone that has that much of a track record and the team should have found another player to sign as their backup QB, and not given Vick the shot.

What do you think?