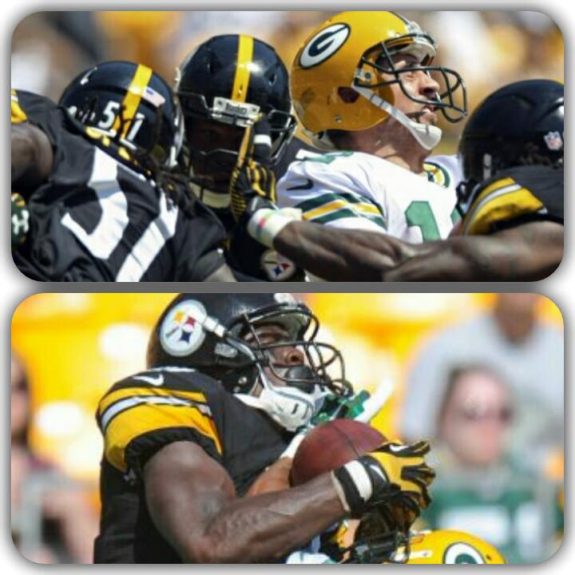 The game between the Pittsburgh Steelers and Green Bay Packers on Sunday was meant to be a real test of two relatively evenly-matched squads.  After injuries started plaguing key players, both teams played off-pace, yet continued to challenge each other.  There were five big things the Steelers came away with after the comeback win.

James Harrison still has it

After Green Bay was able to score a touchdown with an untouched Eddie Lacy and follow it up with a two-point conversion, the Steelers trailed.  Thanks in part to a nice punt, the Steelers pinned Green Bay deep on their next offensive series.  Enter Aaron Rodgers and James Harrison.  Looking like a man half his age, Harrison beat the block and brought Rodgers down in the end zone for a safety and the first points for the Steelers.  If Jarvis Jones and the young linebackers needed an example of how the defense scores, Harrison gave them a veteran freebie, proving he’s nowhere close to being finished with football.

Aside from Harrison, Bud Dupree and Ian Wild joined three other teammates on providing pressure on the Packers quarterbacks, helping the Steelers earn sick sacks.  The upfront pressure was a welcome boost to a defensive backfield still looking for an identity.

Although Ben Roethlisberger only played a little over one quarter of the game, he passed for 100 yards and a touchdown.  One of his best passes went to Markus Wheaton for the score.  Wheaton and Roethlisberger appear to have continued building a relationship of trust on the filed, something that will only improve the overall offense for the Steelers.  Wheaton finished with three receptions for 42 yards and the score on the day.

Tyler Murphy spent last fall at Boston College throwing passes to guys like receiver Shakim Phillips.  Both have ended up on the Steelers roster competing for a spot.  On Sunday, the pair helped mount a Steelers comeback win.  Early in the fourth quarter, Murphy caught a 22-yard toss from Landry Jones for a touchdown, placing the Steelers just one point behind Green Bay on the scoreboard.  Phillips secured the win with a 20-yard reception from Jones with just over four minutes left in the game.  Murphy led all Steelers receivers on the day with four receptions for 61 yards and a score.