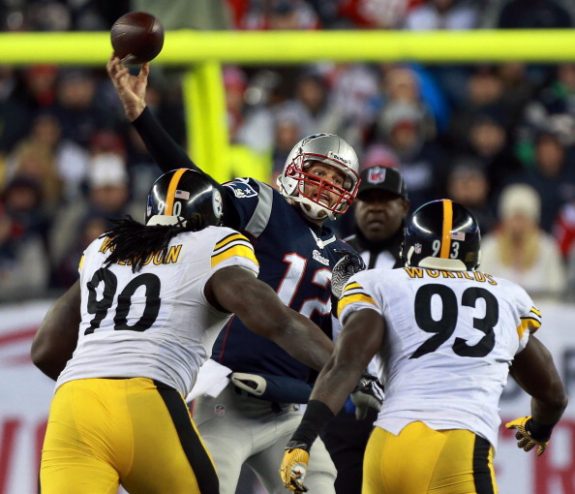 After an offseason filled with news, and a preseason that would rather be forgotten, it all starts for real tonight in Foxborough when the Steelers get set to collide with the Super Bowl champion New England Patriots. We all know that now Tom Brady is going to play, and it will be up to a new-look Steelers defense to try and hold him in check while the Steelers offense does what it can against the Patriots defense.

Today we take a look at the keys for a Steelers win, as well as how we feel the game tonight will wind up.

1. Challenge the Patriots Secondary – The Pats lost both star cornerback Darrelle Revis and Brandon Browner this offseason, and will go with Super Bowl hero Malcolm Butler and Devin McCourty, but this matchup should favor the Steelers with Antonio Brown and Markus Wheaton. Heath Miller should also see action in the passing game, and based on Ben’s last few games against the Pats, he should be able to gain yards in bunches. Don’t be surprised to see the run game get little attention as the Steelers best shot to win is to throw and throw a lot.

2. Throw Different Looks at Brady – Let’s face it, the last three games in Foxborough for the Steelers have been awful. The Patriots have put up at least 30 points in each of Brady’s wins against the Steelers at home, and the Pats have averaged 458 yards and Brady passed for an average of 375 yards in those contests. The common thread in those games was it was all against Dick LeBeau defenses. Now there’s a new man in charge in Keith Butler, and it will be up to him to try and confuse Brady, throw different schemes at him, and even try to get their first pick of Brady in Foxborough.

3. Keep Mistakes at a Minimum – And mind you this isn’t just when it comes to turnovers, though the last time the teams played Foxborough the Steelers had three and wound up allowing 55 points, but it’s also the mental mistakes the team simply can’t make against a Brady-led team. Both defenses have issues, and both offenses are high-powered, meaning that if there’s a chance for the Steelers D to make a big play (interception, fumble recovery) they have to do it. Avoiding costly penalties is also a huge key for the Steelers to find a way to sneak out of New England with a victory.

Prediction – Everyone is back on the Pats bandwagon with Brady back under center, and Vegas seems to feel that New England is a solid touchdown favorite over the black and gold. Despite all the issues in the preseason, now it’s for real, and I have confidence that Butler will have this defense more ready then it was for the likes of the Jags and Bills. Ben Roethlisberger said the goal was for the Steelers to put up 30 a game this year, and against this suspect Pats D they should be able to do it. I have faith in this team, call me crazy but I think the Steelers ruin the Pats party tonight. Steelers 30 Patriots 27

Video: NFL Media Steelers vs. Patriots Week 1 Preview
Steelers Have No Answer For Gronk; Fall to Patriots in Opener 28-21