Steelers Have No Answer For Gronk; Fall to Patriots in Opener 28-21 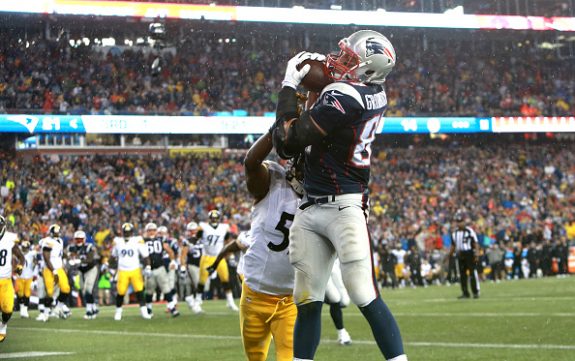 The good news – the Steelers didn’t seem to miss Le’Veon Bell all that much on Thursday night.

The bad news – the team had no answer whatsoever for Patriots TE Rob Gronkowski. Add in a motivated and likely ticked off Tom Brady, and the Steelers wake up Friday 0-1 after a stumbling, bumbling 28-21 loss to the Patriots in Foxborough.

Gronkowski torched the Steelers defense all night for 8 catches for 94 yards and three scores, and after the Steelers pulled it within 7 at 21-14, he pulled in a 52-yard pass on a seam route that might as well put the game away for good.

Brady had no trouble, per usual, against a Steelers defense that seemed totally out of sync in what was the first outing in the regular season for new defensive coordinator Keith Butler.

Hitting 19 straight completions at one point in the Pats win, Brady ended the night going 25-for-32 for 288 yards with four scores, all to Patriots tight ends (Gronkowski with three, Scott Chandler with one).

As for being out of sync on defense, Tomlin seemed to dismiss the issue after the game.

“It’s part of it,” Tomlin said. “Hopefully we will be better and be better really soon.”

It wasn’t all bad for the Steelers, as the offense, which at times seemed to have their way with the Pats despite scoring just three points in the first half, scored 18 in the second half while piling up 443 yards of offense.

Ben Roethlisberger was 26-for-38 for 351 yards with a touchdown and an interception. Antonio Brown had his way with Patriots Super Bowl hero Malcolm Butler, going off for 9 grabs for 133 yards with a score in the final seconds.

“I like the effort of the guys tonight, we played a really good team tonight, they executed at a high level, they changed the pace, they have continuity and veteran players,” Tomlin said.

“He’s been like that since he’s been here,” Tomlin said. “He ran like that in the preseason although in limited exposure, we’re not surprised at what he did tonight, we expected it.”

What was unexpected was the poor outing from new kicker Josh Scobee.

Just acquired after two kicking injures in the preseason from the Jaguars, Scobee missed two field goals in the first half, one that could have put the Steelers up 3-0, and another that could have closed the Patriots lead to four at 7-3.

He did recover to hit two second half field goals, but it was a key blow to a team that needed to score points early.

There was also a major issue with communication, as Steelers coaches were upset that their coach-to-coach headsets picked up the Patriots’ radio broadcast in the first quarter of the contest.

While it was believed to be resolved early in the second quarter, it was yet another issue the Steelers had to deal with against a team that it’s easy to accuse of cheating on a number of occasions.

In the end, the Steelers can’t blame their porous defense for allowing Gronkowski and Brady to march up and down the field at will.

They have 10 days to get their communication issues resolved before they play again – as they will play their home opener on September 20th against the San Francisco 49’ers.