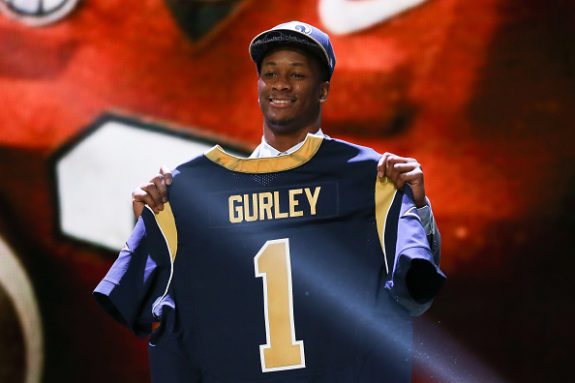 The Steelers and Rams were back on the practice field today as they start to get ready for Sunday’s showdown in St.Louis on Sunday at 1pm.

The Rams only had two players listed on their official injury report, both of which did not participate in practice: RB Chase Reynolds (knee), end Eugene Sims (knee).

What that means is their rookie running back, Todd Gurley, may make his pro debut on Sunday vs the Steelers.

Gurley said he is feeling good and when he was asked by reporters if he would tell coaches he’s ready to play Sunday versus the Steelers he replied “Yeah, I would.”

The rookie back said that he’s working more and more in practice, and that he is really starting to get into true ‘football shape.’

“It’s definitely getting there,” Gurley said. “I know as far as my recovery from being tired, I definitely feel a lot better. I feel like I’ve been doing a great job of that. And getting those reps, it’s helping me a lot.”

As for the official Steelers injury report, here it is: