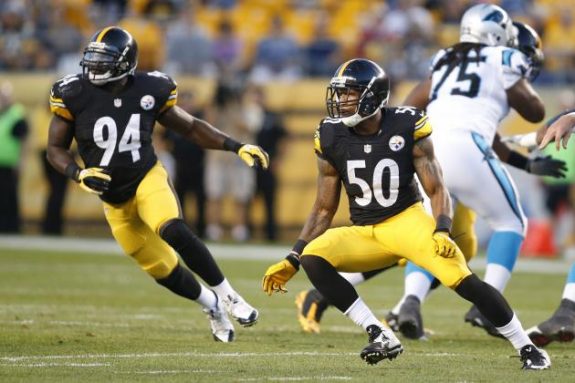 The Pittsburgh Steelers (1-1) are on the road in week three of the 2015 NFL regular season and will face a St. Louis Rams (1-1) team that has been able to put together a tough defensive line and sit at second in the NFC West. The Steelers will be without two-week star linebacker Ryan Shazier who had a career best performance in week two at Heinz Field and second year defensive tackle Dan McCullers. A handful of other players dot the injury list for Pittsburgh.

Cornerback Cortez Allen once again shows up on the injury list for Pittsburgh for a second week after being plagued by a knee that prompted head coach Mike Tomlin to demote him on the depth chart against the San Francisco 49ers in week two after Allen showed an inability in practice to go 100 percent. That led to the Steelers utilizing a combination on Antwon Blake and Ross Cockrell at the right corner position – something that proved effective. With Allen listed as questionable for week three, defensive backs coach Carnell Lake will look once more at Blake and Cockrell to step up.

With McCullers out, Steve McLendon will undoubtedly get the start at the defensive tackle position. Whether Cam Thomas will also give support at the position is up in the air as defensive end Cam Heyward is listed as ‘probable’ with an elbow injury. Although Heyward’s injury does not appear serious, if it acts up during the game and prevents his ability to get leverage on the Rams offensive linemen or tackle rushers, the Steelers may employ Caushaud Lyons on the left side of the defensive line as well this week.

Receiver Markus Wheaton suffered a chest injury during practice this week but was able to participate in practice on Friday, but leaves the door open for Sammie Coates to get his first start of the regular season after the Steelers made room on their roster for running back Le’Veon Bell by releasing, then re-signing Tyler Murphy to the practice squad once he passed waivers. Receiver Isaiah Bruce was released from the practice squad.

Defensive coordinator Keith Butler told the media that Pittsburgh’s defense is more in-tune with each other and after playing together have corrected many of their communications issues. “We want to play fast and we want to know what we are doing,” Butler said, after being asked if the defense had been simplified. “As we go along and as we play this year, we will get better and better. Our goal is to get better every week, and I think we are capable of doing that, if we are smart enough as coaches to keep the menu in, you might say.”

Offensive coordinator Todd Haley feels that one area that will require the most focus from his offense will be along the offensive line. The Rams have put together a dangerous defensive line that has proven capable of disruption to both rushers and quarterbacks through two weeks of play. “They are a fast, quick group,” Haley admitted. “It will be the best group we’ve seen to date. So, we are going to have to communicated well. Everybody is going to have to be on their Ps and Qs as far as what they need to get done.”

The Steelers are excited to have Le’Veon Bell back in the offense and are likely to involve him, not only in the rushing game, but in protecting Ben Roethlisberger and setting up receiving options.

(article originally posted by author on Examiner.com – used with permission)