Checkdown Audible: Why I almost wanted Jeff Reed back in Pittsburgh 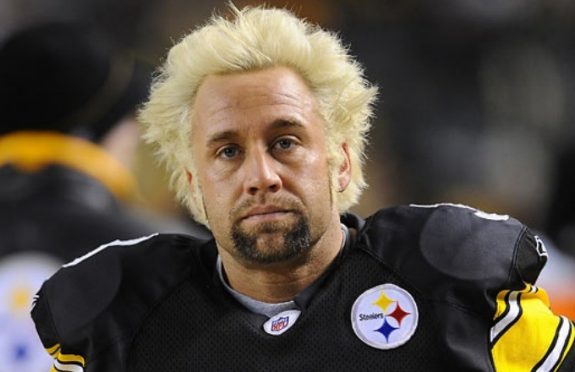 Jeff Reed.  Who can forget the man?  He was wild, crazy and prone to public urination.  He loved the juice – Rolling Rock, Iron City, Pabst Blue Ribbon.  Everything about Reed screamed that he’d spent recreational time in a straight jacket doing inverted sit-ups, but the guy was consistent.  He may have spent $400 on a bar tab on Friday night, but by golly he was kicking the air out of that ball on Sunday.

Ok, so maybe all of that is a bit of an overstatement.  Like Hurricane Juaquim, Reed was a bit of a wild card.  But the guy also won two Super Bowls with the Steelers.  His recent campaign to get the Steelers to notice him, give him a chance to kick field goals – it didn’t go very far outside of Twitter, but it was a valiant effort.  #BringBackJeffReed was a trending topic at one time this past weekend, as was Reed’s name.  Alas, the Steelers did not call him.

I wasn’t alone in looking back at what Reed did for the team.  Between 2002 and 2010, Reed was second all-time behind Gary Anderson for the most points score by a Steelers player.  During the 2005 AFC Divisional Playoff game against the New York Jets, he kicked a 33-yard field goal in overtime after Doug Brien (of the stinky green team) miss twice.  It wasn’t until November 3, 2008, that Reed’s streak of 189 consecutively successful PATs (210 including the post-season) ended.

Ok, so the guy has had some off-field issues.  With 733 points to his name, we might have overlooked some of the shenanigans today – he’s a lot older, perhaps more mature?  He was cited for public intox, disorderly conduct and yes, was with Matt Spaeth who was cited for urinating in public.  Wait, you thought it was Reed who gave the outdoors the watering? Nope. Matt flippin’ Spaeth (who is still with Pittsburgh by the way).  Reed decided he wasn’t going to get into his SUV, having Spaeth’s proverbial back when nature called and the police didn’t find it very helpful, or funny.

I respect that the Steelers went looking for a guy who can kick some pretty crazy onside kicks and was a Rice Owl.  Chris Boswell has no dirty laundry and comes in with a clean slate.

Reasons I almost wanted Reed back:

Join me for just one minute in giving Reed some respect…

Ok, now join me in one of the best music videos made in the 21st Century.

Between the Hashmarks: Can Martavis Bryant Get Back In Good Graces With Steelers, Self?
Flashback: Steelers Beat Up By Chargers 34-24 in Key 2012 Late Battle