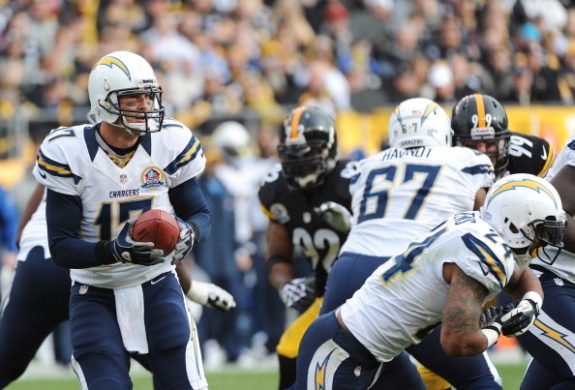 The Steelers have had a week plus to stew about their loss to the Ravens last Thursday, and now have a critical trip to the west coast as they take on the Chargers Monday night.

San Diego was able to get past the Browns last week on a final play field goal after Browns CB Tramon Williams jumped offsides on what could have been a missed kick.

Here’s how we think it will go down this week as the Steelers look to get to 3-2 against the Chargers in San Diego.

1. Ring the Bell – San Diego through four games is allowing 126.8 yards per game on the ground, and that bodes well for Le’Veon Bell as well as DeAngelo Williams. The pressure needs to be on the O-line as well as the backs to carry the teams offense. Bell has looked good in two games back with the team, and last week did a nice job against the Ravens. Between he and Williams they need to touch the ball 30-40 times, and it should help when Vick does go have to pass.

2. Pressure Rivers – Last week vs Cleveland Philip Rivers had a big game, completing 23 of 38 passes for 358 yards, three TDs and no interceptions, and nearly posted a perfect passer rating (154.9) in the second half despite playing behind a depleted offensive line. He leads the league with 1,248 passing yards and with 260 career passing TDs. The Steelers need to pressure Rivers and not allow him time to throw. It’s true they have issues at wide out, but that didn’t stop Rivers from finding Danny Woodhead often last week in the clutch. The LB’s need to have a good game for the black and gold.

3. Avoid the Big Mistakes – The Steelers did a decent job last week of protecting the ball, but can’t give San Diego short fields on Monday night. The Chargers will look to make plays and force mistakes from Vick, and while the game plan should be run and run often, the QB needs to not throw costly picks and give up much needed field position. The crowd in San Diego will be up for the game it being on Monday night, and the Steelers have to be careful not to make sure to give the Chargers plenty of short chances at points.

Prediction – The picks all seem to be leaning towards the Chargers, but I feel that the Steelers have a great shot to hit big plays as well as run the ball down the Chargers throat. San Diego was lucky to beat the Browns at home last week, with Josh McCown throwing the ball all over the place. Look for a monster day from Bell (150 total yards with 2 TD’s) and the Steelers defense to pressure Rivers to get a turnover or two and get a win. Steelers 24 San Diego 17

Blast Furnace: Four games in, the Steelers are evolving
Steelers Pull Out Miracle Win at the Buzzer; Top Chargers 24-20 in San Diego