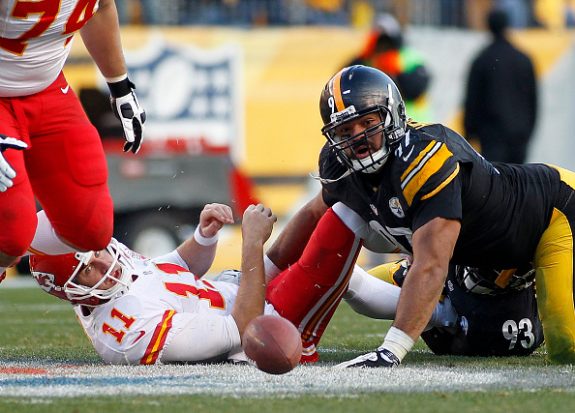 The Steelers take to the road tomorrow to take on the 1-5 Kansas City Chiefs, but before you start to count this as an immediate ‘W’ for the black and gold, let’s recall last season when the 6-3 Steelers were coming off a huge run in which they had won three straight at home, then traveled to play a Michael Vick 1-8 Jets team, only to lose.

Now the Steelers should understand they have a lot more to play for than just a W. A win and it will set up a big game next week against the Bengals, who have yet to lose a game, and the Steelers should have Big Ben back in the lineup for that matchup.

Let’s look at what has to happen for the Steelers to get to 5-2, and ready for next week’s big matchup with the Bengals at Heniz Field.

1. Get Landry Comfortable Early – Jones was 8 of 12 passes for 168 yards and two touchdowns against the Cardinals, and while he’s the toast of the town today, a bad outing vs the Chiefs that can quickly turn around. The offense needs to make sure to get him off to a quick start, make sure not to put too much pressure on him, and allow him to get the ball early to players like Bryant, Brown and even Bell on some screens. KC is ranked 25th in pass defense, and that should open up some passing lanes for Landry early to then be able to have a productive day.

2. Keep the Chiefs Grounded – Last week in a loss to the Vikings, the Chiefs were held to season lows in rushing yards (57) and points with 10. The Steelers have to keep that Chiefs offense stuck in the mud, as without Jammal Charles who is out for the season this is a team that doesn’t have much firepower. The Chiefs were over 100 yards a game on the ground with Charles, but without him the team will be hard pressed to run on what should be a motivated Steelers team. Look for the Steelers D to put a hurting on a Chiefs offense that looks to be heading backwards from the end of 2014.

3. Don’t Make Silly Mistakes – On the road three things can stop the Steelers from 5-2, and that’s penalties, turnovers, and allowing big plays. On the road the Steelers didn’t do much till the fourth quarter vs the Chargers, and while San Diego is better than the Chiefs, there’s no excuse to have a repeat of that Sunday. The Steelers can’t shoot themselves in the foot with bad penalties, and can’t let the Chiefs have confidence with giving up big plays to an average at best offense.

Prediction – The Steelers have shown a lot of resolve and guts the last two weeks in wins over the Chargers and Cardinals, and while they are riding high, they have shown the tendency the last few years to have let downs or ‘trap games’ and this could be one. The Chiefs are in a lot of trouble in a lost season at 1-5, and the Steelers need to come out swinging and not allow KC to get any sort of early confidence. This team has to support Jones at QB and the defense is starting to show more and more signs of being a force. Unlike that Jets game a year ago, I think this time the Steelers get it done. Steelers 24 Chiefs 10