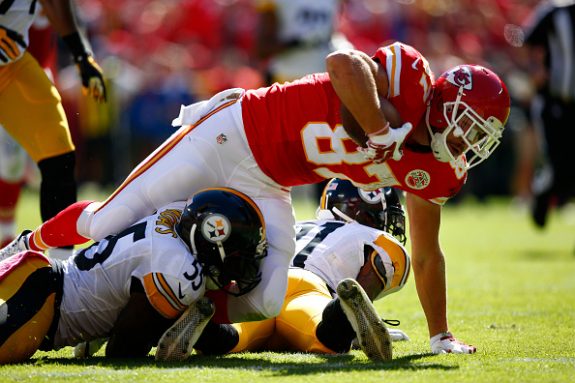 The Steelers tried for one more week to get away without playing quarterback Ben Roethlisberger, and is usually the case again bad teams on the road, it didn’t work.

Alex Smith and a Chiefs team that had lost five straight did more than enough on offense, combined with poor tackling on the part of the Steelers defense was enough for a Chiefs 23-13 win.

The Steelers were hoping to get another repeat outing from QB Landry Jones, who was the hero last week in the teams win over the Cardinals, but it was not to be.

The Steelers defense held the Chiefs and got the ball back with the hopes of taking the lead. Instead, after they got to the Chiefs 13 on a long Le’Veon Bell run, they had to settle for a Chris Boswell field goal to draw it to 16-13.

It was the end of any hopes for the Steelers, as the Chiefs hit two huge plays on the next drive to put the game away.

The first was a third-down conversion when Smith hit tight end Travis Kelce with a 26-yard gain on 3rd-and-4 to give them a key first down.

Then on the next play Charcandrick West went 36 yards to put the ball to the Steelers 16. Smith hit Chris Conley with a 6-yard touchdown to put the game away.

The Steelers drove to the Chiefs 39 after a penalty on fourth down, but Jones was hit and the ball came out, recovered by KC to end any last hopes the Steelers may have had.

Smith was effective even without Jammal Charles, going 21-for-32 for 251 yards with a touchdown and no interceptions. He was sacked twice but stayed out of trouble most of the day.

The Steelers with hopefully Big Ben back, will play the 6-0 Bengals at home next week.