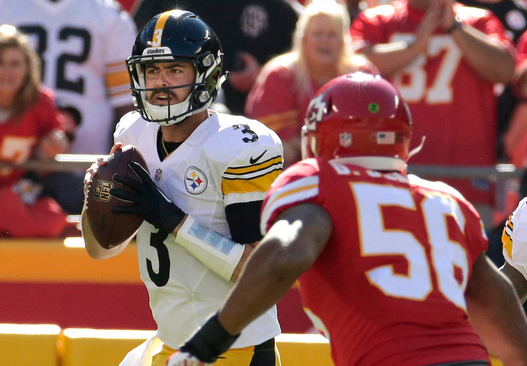 Landry Jones didn’t enter the game against the Kansas City Chiefs with nearly the swagger he had at the end of the Steelers’ week six win, struggling to get the offense moving in the first half. Jones came out of the locker room and was able to chip away at the Chiefs defense with help from two big plays from Antonio Brown and Martavis Bryant and the patient running of Le’Veon Bell. Unfortunately, it was turnovers that hurt Jones and the Steelers, forcing Pittsburgh to come away with a 10-point loss.

A lot of people were talking about this week seven game being a ‘trap game’.  The Steelers had opportunities, but too few and not often enough.  Jones was only able to complete 16 of 29 passes for 209 yards and a touchdown.  The two interceptions and sack-fumble spelled doom.  One of the interceptions was a result of a tipped ball at the line that left Antonio Brown without a clean catch; Brown grabbed at it, tipped it and the ball landed in the hands of the Chiefs.

The touchdown by Martavis Bryant was a corner fade that nearly went bad.  Bryant bobbled the catch, but was able to maintain possession just long enough to get both feet inbounds.

Bell had 17 carries for 121 yards.  His longest run went for a remarkable 42 yards.  Bell shared rushing duties with DeAngelo Williams who had four carries for just nine yards and was mainly used in short yardage situations.  Bell also had four catches for 16 yards.

Brown had six receptions for 124 yards; his longest a 41 yard catch.  Once again he was unable to get into the end zone.

Martavis Bryant, Markus Wheaton and Williams all had limited catches.  Outside of the touchdown, Bryant had only three catches (45 yards), Wheaton had two (16 yards) and Williams a single catch for eight yards.

The Steelers defense played a hard-fought game for a full 60 minutes. Although they continue to lack wrap-up ability on many plays, they showed toughness by keeping steady pressure on Alex Smith.  Cam Heyward logged one sack, with Ryan Shazier and Lawrence Timmons splitting another.

The Chiefs threw in some trickery and misdirection to keep the Steelers defense on their toes, coming away with a few nice plays. Chiefs tight end Travis Kelce was a handful, finding space to make plays when Pittsburgh played soft coverage. Without a lot of offensive performance, the Steelers defense was tasked with keeping the game close.

In the end, the slow start and turnovers kept the Steelers from putting necessary points on the scoreboard for a win.  Kicker Chris Boswell was two-for-two on field goals with his longest sailing for 36 yards.

Steelers Fall to 4-3; Lose to Chiefs in Kansas City 23-13
Not Falling In The Trap