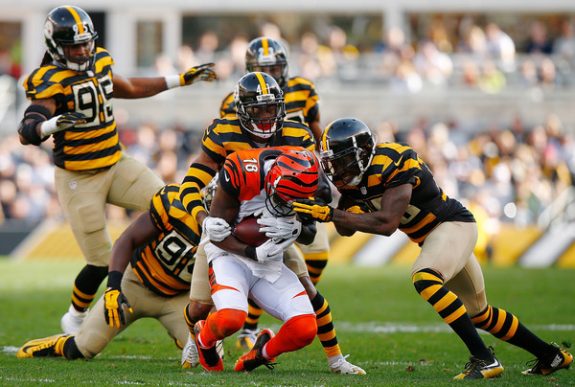 Another week, another game where the offense could not convert defensive takeaways into points.  It was a bit of a sad affair watching the return of Ben Roethlisberger turn into a Cincinnati Bengals win.  First, the Bengals were killing themselves.  Penalties.  Bad snaps.  Andy Dalton not as sharp as he could be due to a Pittsburgh Steelers defense that kept up the pressure.  This Steelers team may have had a ballyhooed offense at the beginning of the season, but their defense is what is keeping them in games in 2015.

.500.  That is where the Steelers are after the 16-10 loss at Heinz Field.  Just average.  Take away the offense, the stupid penalties and the dropped balls and you’d have to look at one thing.  Defense.

The Steelers defense has not only steadily improved as the season has gone forward, but have overshadowed their teammates on offense.  You can say, ‘well, Le’Veon Bell got hurt’ or ‘Ben was rusty’, but all of that does not explain why Pittsburgh can not take advantage of defensive stands or takeaways.

When you have Mike Mitchell snaring a Dalton pass after Antwon Blake did one of the previous possession and you get zero return, pretty soon your defense is going to be let down.  After watching Roethlisberger throw his third interception, the defense did just that.  The Bengals went into a hurry-up situation, started targeting tight end Tyler Eifert and then found A.J. Green within arm’s reach of the goal line.  Green simply had to push the ball away from his body to score.  By then, all the air had been taken out of the Steelers D.

There were a lot of things that went right in this game.  Time management, reducing penalties, effective offense were not positives this week.  Mike Tomlin, Keith Butler and their staff have no room for excuses.  The offense fell apart.  With Roethlisberger struggling, you didn’t see any player step up to give him much aid.  Meanwhile, the defense could almost have played this game and won it on their own if they’d been given placekicker Chris Boswell and punter Jordan Berry.  Just take the ball away, block Bengals field goals, return interceptions, jump on bad snaps and get Boswell close enough to kick a field goal.

Exaggeration? Maybe.  You have to wonder if it isn’t way past time to have hope that this Steelers offense is going to look anything near championship caliber.  No points equals losses.  Letting the defense carry your team very often leads to a non-winning season and no playoff hopes, either.