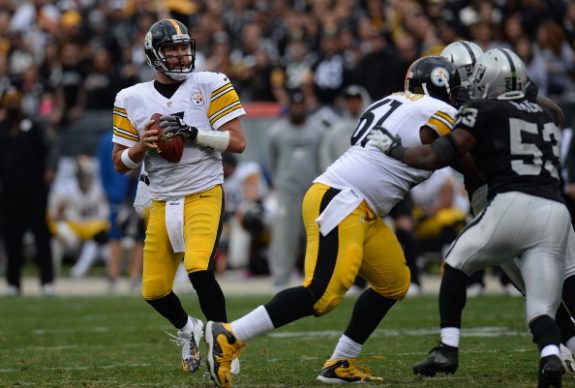 The 4-4 Steelers seem like a snake-bitten bunch in 2015, a team loaded with talent but just can’t seem to avoid injury. They have lost two straight, losing to the Chiefs on the road and a huge home loss to the Bengals last Sunday, but in all that, their biggest loss might be that of running back Le’Veon Bell, who is going to miss the rest of 2015.

Now with eight games left in the regular season in 2015, the Steelers have to likely settle for a wild card unless the 8-0 Bengals have a complete collapse. Sunday the Steelers take on a team that could be in their path for a wild card spot, that being the up and coming Oakland Raiders.

The Raiders and Steelers could provide for a shootout tomorrow at Heinz Field, and today we break down the game and give our pick of who we think will come away with the win.

1. Keep Carr Busy – In past six games, Raiders young QB Derek Carr has completed 143 of 217 (65.9 pct.) for 1,732 yards with 15 touchdowns and just three picks. Carr looks like a star in the making, and one way to stop him is to pressure him, which the Broncos did a few weeks back during a Denver win in Oakland. Carr can move, but he’s not a great runner, so if the pressure can come up and middle and collapse the pocket, it will give the Steelers defense a shot to keep the good young WR’s of the Raiders covered and give the Steelers the best shot to win.

2. Quick Hits for Ben – In his second week back after injury, it will be on Ben Roethlisberger to pick up a Steelers offense that started fast last week, but faded quickly in the loss to the Bengals. Big Ben has to beware of two big Raiders linebackers, Khalil Mack and Aldon Smith. Mack has four sacks in his last five games, and will give offenses fits if he’s not accounted for. The O-line has to step up and make sure to keep Ben upright if the Steelers are going to get to 5-4. That starts with Mack and Smith not having their way with coming around the corners.

3. Finish – It’s a term you hear a lot in the NFL, but it’s the difference between the good and bad teams. The Steelers last week beat the Bengals – for nearly 58 minutes. Then they gave the game away a couple turnovers and didn’t execute, which is why they are not playing for a wild card for the most part over a division title. The team needs to stay focused for 60 minutes, as Oakland isn’t a team that can be taken lightly, as they are a young dangerous team that has beaten the Steelers in four of their last five meetings. Mike Tomlin is 1-3 vs the Raiders lifetime, and it’ll be on him to make sure this team is prepared for what’s the biggest game of the season tomorrow.

Prediction – The Steelers have had a full week to stew on the loss to the Bengals, as well as overcome the loss of their leading rusher Le’Veon Bell. I feel that this team is ready to come out and be as focused as they have been all season, if not, this season can go from one of great promise to one of being one that could see this team maybe being nothing more than a .500 club. They should have the advantage of being at home, and need their defense to pressure Derek Carr and can’t forget to run the ball often with DeAngelo Williams to open up the passing game. Look for a Steelers team that many have forgotten about to play their second best game of the year (with the Niners game being the best). Steelers 34 Raiders 21