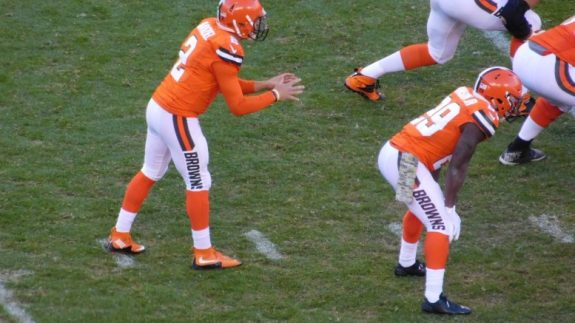 Browns head coach Mike Pettine is trying his best Jedi mind tricks against the Steelers, declining today to announce what QB will be under center against the black and gold Sunday.

“I won’t say I don’t know, but it’s just from an information standpoint, we have our plan built to be either way,” Pettine said Friday.

Pettine did state that backup QB Johnny Manziel took the majority of the reps today in practice, the third straight day he’s taken most of the snaps, while normal starter Josh McCown has been limited.

The Browns coach said that neither of his QB’s knows which one will get the start Sunday, but it’s rather obvious that Manziel is going to get the call since he’s taken most of the first string snaps.

When asked on if it matters if a defensive coordinator knows who the opposing starting QB will be, Pettine said it really does have an influence in the game plan.

“If you’re game planning as to whether or not you need to – let’s just say you’re going against a guy that could potentially scramble and you’re going to have calls up that are or as far as setting your plan and having you’re a plan and knowing who it’s going to be and being able to review that on a Saturday night,” Pettine said.

There’s no doubt there’s a difference between the two, as Manziel can scramble and will look to make plays, while McCown is more of a pocket passer and overall the team’s offense has been better with him.

Nevertheless the Browns are 2-7, and no matter who is under center the Steelers should have the edge.