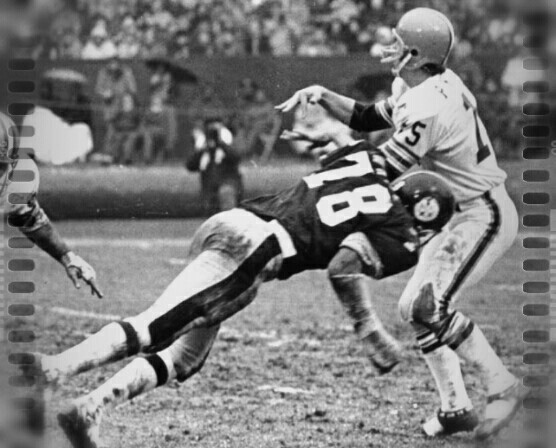 The rivalry between the Pittsburgh Steelers and the Cleveland Browns is one of the oldest in professional American football and is the oldest in the AFC North. The two teams played their first game against each other on an October Saturday night in 1950; the Browns handing the Steelers a 30-17 loss. Since that time, the two teams have met each other more often than any other AFC matchup.

To get a true sense of the rivalry, you’d need to go back to a time before, when two blue-collar cities of American industry put their faith in perseverence, get-it-done attitudes and a pride in being tough enough to handle any adversity thrown their way. The football teams that represented those cities – win or lose – were bred on the idea that the gridiron was where hardened men used their bodies like battering rams and ground every inch of turf underfoot. Separated by around 137 miles, the two cities were born of the same competitive cloth and were thrown into one of the most natural rivalries in the NFL.

In 1950, the Browns left the All-American Football Conference to join the National Football League. Capitalizing on the close ties the two cities already had, the league scheduled games between the two teams drawing on the power of competition; pitting the Steelers and Browns against each other on 12 Saturday night games between 1950 and 1970. The atmosphere was palpable as fans traversed state lines to show their support at each others’ fields.

The early years saw the Paul Brown powerhouse steamrolling the Rooneys’ Steelers, but the players kept score by how many hard licks they could give and take as much as the numbers on the scoreboard.

The American Football League merged with the NFL in 1970, but Cleveland and Pittsburgh were two of only three NFL clubs to be assigned to the American Football Conference – where the NFL placed all the AFL teams. Many old rivalries were broken up by the move, but the Steelers-Browns series remained the centerpiece of the AFC Central Division for many years. As the league changed, so did the Steelers’ losses to the Browns.

The rivalry isn’t quite as heated these days, but the Steelers vs Browns games always seem to be stepping stones into the playoff picture, somehow.  The two teams are now in the AFC North, but it is a guarantee if one team has no chance at the postseason, they’re looking for a win to spoil the plans of the other to get to the Super Bowl.  In 2015, it’s not any different.