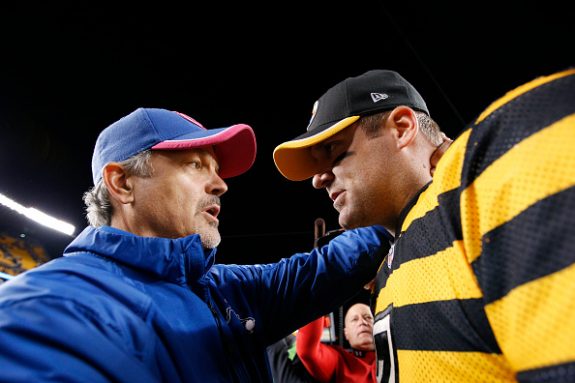 When a few weeks back it was announced that Colts QB Andrew Luck would be missing in action for awhile, many Steelers fans felt a whole lot better about their week 13 chances against backup Matt Hasselbeck and the Colts.

Now, with the game in front of Steeler Nation, there’s some nervousness about how well Hasselbeck has played, and how the Colts have responded based on the fact they are playing without a guy who last season carved up defenses many weeks like swiss cheese.

For the Steelers, Sunday is basically a do or die following the loss on Sunday to the Seahawks. Losing to the two-time NFC Champs on the road was nothing to be ashamed of, it was how the team lost and how the team could have won a huge game that would have kept them in the drivers seat in the AFC playoff race.

Now, they have to win – and keep winning. Today we look at the game, and how we think it will play out.

1. Remind Matt Hasselbeck He’s 40 – The way to knock the former Seahawks QB the Steelers played in Super Bowl XL of his age is pretty simple – pressure and hit him. He’s 4-0 as the Colts starter, and last week the Bucs were not able to put much of a pass rush on him, and he threw for over 300 yards. No doubt he’s licking his lips after watching Russell Wilson dominate the Steelers a week ago, and one thing that Russell and the Hawks did was create time in the pocket. Keith Butler needs to come up with ways to get to Hasselbeck, and hopefully create turnovers in the process.

2. Keep Riding Ben – Over the last three games, Steelers QB Ben Roethlisberger has thrown for an average of 389.7 yards with six scores and four picks. At the end of the day, this team hasn’t been the same without Le’Veon Bell, and it seems now that DeAngelo Williams is almost more of a threat in the passing game than the run game. Sure it’s dangerous to see Ben have to throw 50 times, but at the same time, it looks like it’s the formula for this team to win games right now and for this offense to generate points. That also puts pressure on the O-line to protect the franchise QB.

3. Splash Plays – Last week the Steelers D gave up the biggest play of the day, a huge pass from Wilson to Doug Baldwin that took a 32-30 Seattle lead and turned it into a 39-30 lead. Let’s see if this week against the Colts the Steelers D can shut down the big plays, and create more of their own like last week when Ben hit Markus Wheaton for a huge TD pass that put them back in the lead in the second half. With two passing defenses that are not all that good, it could be a night for big plays.

Prediction – The Steelers have their backs to the wall, and have to come out slinging away in order to walk out of Heinz with a win. They have to be careful, as those turnovers last week killed the team and their offensive momentum. I like their attitude this week, and I think they have it in them to make sure the Colts don’t extend their win streak to five in a row. Look for a bounce back from AB and for Ben to again go over 350 yards. It will be up to the D to have a bounce back night – and while they won’t be perfect, they will do enough. Steelers 31 Indianapolis 23