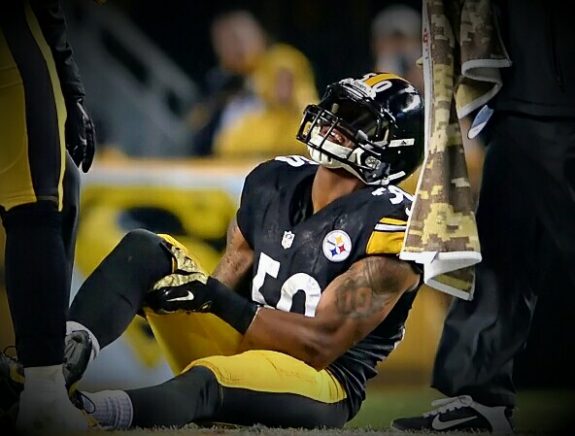 Steelers linebacker Ryan Shazier has had his fair share of injuries since being selected in the first round of the 2014 NFL Draft, and he isn’t immune to the voices of frustrated fans who have littered social media with comments that he is “soft” due to those injuries. In fact, Shazier publicly acknowledged his own disappointment.

“(The injuries are) real frustrating but God has a plan and he’s helping me be patient and learn form the guys in front of me,” Shazier said.

Shazier suffered a concussion in the loss to Seattle and what is scary is that he blacked out and can’t remember parts of the game. Regardless, Shazier returned to practice on Thursday and said, “I feel I’m ready to go out and play.”

Shazier isn’t satisfied that his time with the Steelers has been riddled with down time (seven games his rookie season and four in a row in 2015) due to injury, but his frustration may play a part in why he gets hurt. This season, Shazier has proven to be a natural at the linebacker position when he has been on the field, recording at least 0.5 sacks in five games. Shazier is also averaging around seven tackles a game. When he is out there, he’s banging heads and throwing his body around to make big plays. That kind of aggressive style may seem reckless to some and necessary to others.

When Shazier is healthy, he’s one of the quickest guys on the defense and best wrap-up tacklers the Steelers have. He’s solid. He could use a little luck when it comes to the injury bug, but he is a full speed ahead and no nonsense player.

Fans can harp about how fragile he appears, but the guys he’s hitting don’t feel it. The kid can straight up play. Maybe he could take a page out of James Harrison’s workout regimen, but Shazier is bound to get banged up when he plays with as much heart and competitiveness that he posesses.