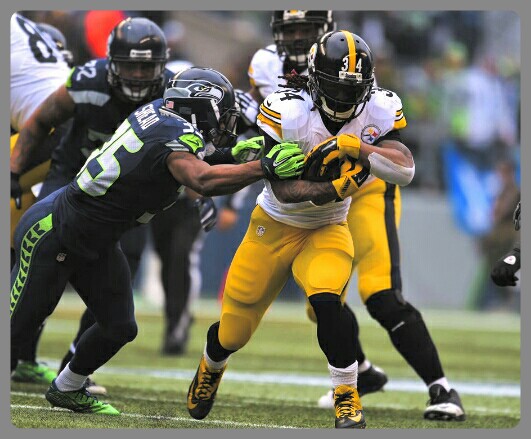 I’m going to throw out the negativity this week.  There is plenty of it to go around, but right now the Steelers need to focus on improvement and stop languishing in the mire of the past.  They can’t ignore what hasn’t worked but their vision must look at the positives and set goals that capitalize on what is working.

DeAngelo Williams has proven to be the best free agent pickup for the Steelers this season.  He has shown that age is not deterring him from pumping his legs for extra yardage or even being patient as he waits for his blockers to open holes. Williams is also showcasing a nice set of hands as he exits the backfield as a receiving target.

Against Seattle, the Steelers brought Roosevelt Nix and Will Johnson on for decent plays as well, giving the Seahawk’s defense a different look that opened opportunities for the offense.

Using this strategy worked – and it can continue to work if the coaching staff recognizes the potential.

I have pointed out that the Steelers needed to involve Heath Miller more in the passing game.  The Steelers did until Miller suffered a rib injury.  They then allowed Matt Spaeth and Jesse James to get into the seams for decent yardage.

Nearly every NFL team this season has been hurt by tight end play, including the Steelers.  Coverage has changed to focus on preventing big plays by quick receivers.  This leaves the middle of the field open, especially when opponents use a contain defense that focuses its backfield on pushing wideouts to inside routes or limiting space between the field of play and the sideline to narrow the window for quarterbacks to hit.

There is nothing wrong with short to medium passes when they help convert critical downs and move the chains.  With the seams protected mainly by linebackers dropping into coverage after their initial push towards the line, the Steelers can capitalize on mismatches.  Pittsburgh’s tight ends may not be sprinters, but they are relatively big targets that have shown they are strong enough to battle in the middle.

3. Pressure early and often on both sides of the ball

The Steelers have talented guys on the roster – on offense and defense – that just have not been consistent from week to week.  Pittsburgh could improve that by applying pressure, not on their teammates, but on opponents.  First, receivers have to make catches.  Second, Ben Roethlisberger or whomever is in at quarterback must get the ball to those receivers without forcing a throw, passing into dangerous coverage or letting go of the ball if they can’t see the receiver is still standing and in the route.  By pressuring opposing defenses with quick, precise play the Steelers can keep momentum in their favor and morale high.

On defense, the Steelers should take advantage of different packages and schemes that confuse opposing quarterbacks.  When Pittsburgh was substituting on defense more often early in the season, they created opportunities for more quarterback hits, hurries and frustration.  That led to mistakes the Steelers identified as takeaway opportunities.

Pressure only works if you stick with it.  Waiting until the final quarter to blanket receivers has not been effective.  A lack of in-game adjustment puts the Steelers on their heels.  If the game is fluid, the type of pressure applied must change with that flow.  When Pittsburgh has followed this pattern, they were successful.  When they lost site of it, they also lost sight of a chance at having more points on the scoreboard than their opponent at the end of the game.

This team, to the man – from coaching staff to players – needs to be truly accountable to their job description and for their performance.  It is a losing strategy to refuse to honestly acknowledge errors and truly correct them.  Correction means to stop and change, not give speeches about how it could have been better. Make it better. Stop taking and start doing.  The Steelers aren’t all washed up unless they buy into denial.  It’s time to really own this season by showing improvement on the field and sidelines rather than having a ho-hum attitude of ‘we will get the next one’.

Between the Hashmarks: A Prediction That Has Come True For Steelers
Hard Count: Steelers’ Shazier Solid When Healthy