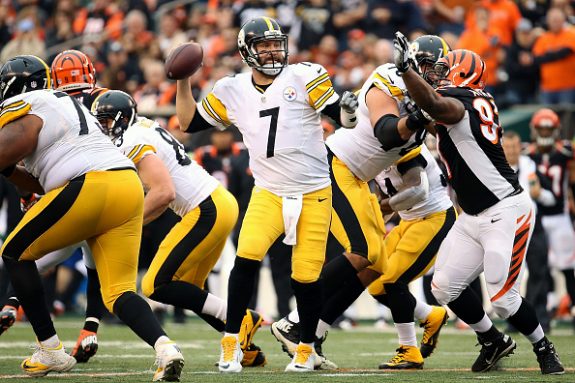 It was like a heavyweight fight in which the defending champion came in looking for an early knockout.

Playing the role of the defending champion was the Steelers, and for them the knockout of the Bengals came quickly and with a thundering blow to a number of their key players.

With that knockout came another impressive win for the black and gold, their fourth in five games as they dominated the AFC North leading Bengals 33-20 at Paul Brown Stadium.

What does it mean for the now 8-5 Steelers? They have to keep winning – and up next is another tough test – the AFC West leading Denver Broncos, who will come to Heinz Field for a 4:25pm kick.

The Jets and Chiefs both won Sunday, meaning as of now the Steelers are still on the outside looking in on a playoff spot with three games left to play.

Sunday though in Cincy there was a major chip on the Steelers shoulder, and it showed in the pregame when the two teams got into it during warm ups. 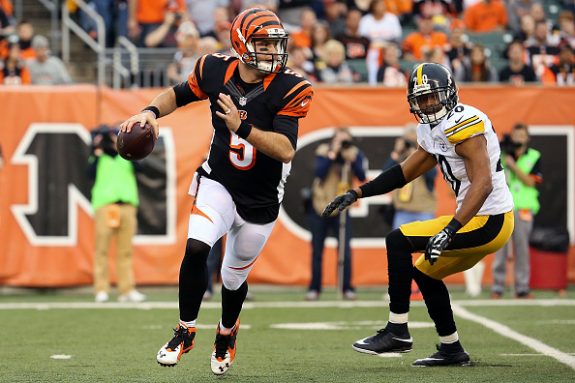 They never let up, as they seemed to put their foot on the gas in the opening kickoff and never let up, scoring 33 points, and putting up 354 yards in the 13-point win that could have been more.

Ben Roethlisberger was 30-for-39 for 282 yards with a pick, but he also helped the team with being smart with the ball, and hitting big plays. The Steelers were 8-for-14 on third downs.

Right away the Steelers moved quickly downfield on their opening drive for a DeAngelo Williams score to take a defining 7-0 lead at the 9:28 mark of the first quarter.

The Bengals offense came right back, and it looked like it was going to be a tie game, when the game and season for Cincinnati totally changed.

Stephon Truitt picked off an Andy Dalton shovel pass, and the Bengals quarterback hurt his right thumb while making the tackle. Dalton’s hand was placed in a black cast, and he was done for the day.

The Bengals had a number of big players go down, not only Dalton but TE Tyler Eifert left the game as well.

The Steelers got two field goals from Chris Boswell to make it 13-0 midway though the second quarter, but they allowed the Bengals back into the game as backup QB A.J. McCarron hit A.J. Green for a 66-yard score to make it 13-7 with 6:33 to play in the half.

Boswell got another field goal to make it 16-7, this time from 45 yards out give the Steelers a nine-point lead at the half.

McCarron made a critical mistake early in the third, as William Gay picked him off and went 23 yards just 50 seconds into the third quarter to make it a 23-7 game. 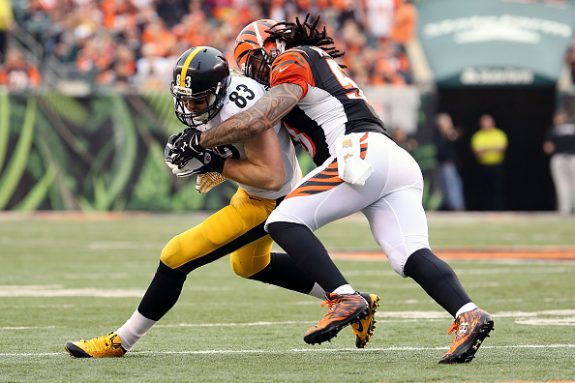 The Bengals marched down the field down 16, but inside the Steelers 10 instead of going for a TD, they kicked a chip shot field goal to make it a 26-13 game.

The Steelers put the game away after a pick of McCarron by Robert Golden to seal the win. Williams went in from a yard out to make it 33-13.

The Bengals got a garbage TD as McCarron hit Rex Burkhead from five yards out with 1:07 to play to close out the game at 33-20.