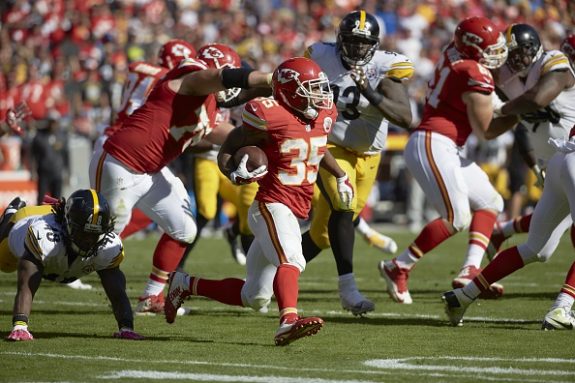 In case you were on another planet, the Steelers are in a fight for a playoff spot in the AFC, and with three weeks left in the regular season, the black and gold remain on the outside looking in at the post season despite an 8-5 record.

In order to make the playoffs, they need to pass either the Jets or the Chiefs, two teams that you can argue the Steelers are better than, yet as of today are behind the two teams in the playoff race.

Today, we take a look at the three teams, and what’s left on each teams slate and the chances for the Steelers to make it to the NFL’s ‘second season.’

The Steelers have two road games and the very important showdown with the Broncos Sunday, who laid a monster egg Sunday at home to the Raiders. The road games are a night game against the Ravens and a final week game vs the Browns, who have won just three games. Many say the Steelers are the most dangerous team right now in the AFC winning four of their last five, but they can’t have a slip up and need to keep the foot on the gas for the final three weeks.

The Jets are the team the Steelers are most likely to pass in the playoff race, as this week they have an interesting matchup in Dallas on Saturday, and then a home game against the Patriots, who now need to keep winning to get a playoff bye and clinch home field in the AFC. The Bills game on the road in week 17 is no cakewalk either. Here’s a prediction that the Jets go 1-2 and get passed over by the Steelers in the playoff race.

The Chiefs lost their biggest offensive weapon in Jammal Charles, yet since their win over the Steelers on October 25th they haven’t lost a game, winning seven in a row and being the most consistent team in the AFC. Alex Smith is playing lights out, and the Chiefs D is as good as any in the NFL right now, ranked 8th overall in the NFL. Hard to think they will have a slip up in the final three games, all against under .500 teams. If the Chiefs are going to lose, the Raiders are the team to watch, as the could be riding high after their win over the Broncos Sunday.