Steelers Come Back To Beat Denver, 34-27

The Pittsburgh Steelers improve to 9-5 on the 2015 NFL regular season with a 34-27 win over the Denver Broncos at Heinz Field on Sunday. 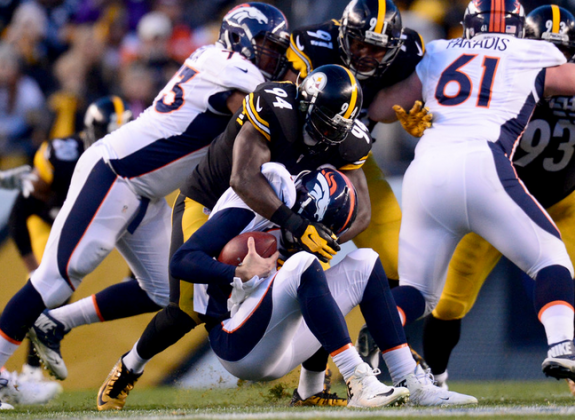 The Pittsburgh Steelers had their fans in an absolute hair-pulling situation in Week 15 against the Denver Broncos.  After a disastrous first half, the Steelers came out of the locker room at halftime to come storming back in a 34-27 win.  The 17-point deficit the Steelers overcame was their largest since October 5, 1997 against the Baltimore Ravens when they were down by 21 but came back to win, 42-34.

The Steelers started the game with the first offensive possession resulting in a punt only to watch the Broncos (Hillman) lose the ball and Mike Mitchell recover it.  That put Ben Roethlisberger in the driver’s seat to set up a DeAngelo Williams rush into the end zone for the first points of the game.  After the initial success, the Steelers allowed Brock Osweiler to run up the score with little resistance.

Osweiler was able to repeatedly toss easy throws that set up an 18-yard touchdown pass to Demaryius Thomas, a 61-yarder to Sanders, run unimpeded for a score and then find Thomas again for a short six.  The Steelers defense suffered due to extremely soft coverage and looked completely overwhelmed by a Denver offense that hadn’t scored an offensive touchdown in eight quarters of previous play.

By halftime, the Broncos led the Steelers 27-13.

Oh, to be a fly on the wall in the Steelers locker room at halftime because whatever was said or done worked once Pittsburgh took the field in front of a record-breaking Heinz Field crowd.  The crowd got loud and the Steelers woke up.

The Broncos got the ball first in the second half, but exchanged a couple of three-and-outs with the Steelers before Roethlisberger orchestrated an eight-play drive that ended with a nine-yard touchdown pass to Antonio Brown.  The Steelers went on to score 21 unanswered points and pitch a defensive shutout for the win.

Roethlisberger gave every Steelers fan a scare when he forced a pass late in the game that resulted in an interception.  Questions will be raised about why he even went for the toss to Williams in a situation where the Steelers could have run the clock to the final seconds by rushing – and Big Ben would be the first one to tell you he wished he’d held the ball or just throw it into the turf.

The Steelers defense held strong and got the ball back, dumping Osweiler for the second time in the game and taking away the easy pass.

Roethlisberger finished the game with 40 completions for 380 yards and three touchdowns (2 interceptions).  Two of those touchdowns went to Brown who had 16 receptions for 189 yards.  Markus Wheaton had six catches for 62 yards and a touchdown.

Ryan Shazier was the recipient of an Osweiler interception and Will Allen led the Steelers in tackles, adding a forced fumble on the afternoon.  Cam Heyward and Lawrence Timmons earned a sack apiece.

The Steelers move to 9-5 on the season by putting together a three-game winning streak.  They face the Baltimore Ravens in Week 16 and finish the regular season on the road against the Cleveland Browns.  Both the Ravens and Browns were eliminated from playoff consideration on Sunday.