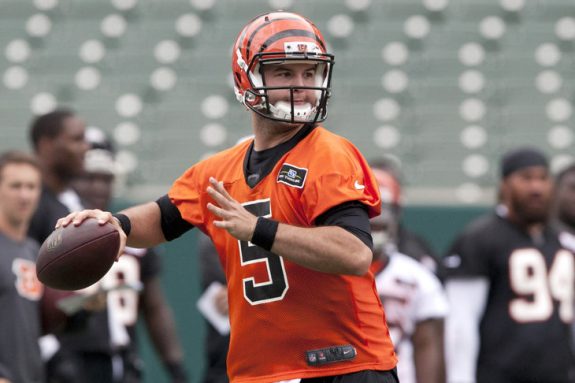 The big question for the Bengals this week is who will be under center when the Steelers come to Paul Brown Stadium for round three of their 2015 feud, this time with a trip to the AFC Divisional Playoffs on the line with the loser going home.

The first game saw Andy Dalton go for the Bengals, while in the second game it was mostly backup AJ McCarron, who came in for an injured Dalton after he fractured his thumb.

According to a report from the Cincinnati Enquirer today, it appears that if the Steelers want to move to Denver – it will be McCarron under center, not Dalton.

Here’s the story on the latest with the Bengals:

Bengals staring quarterback Andy Dalton met with doctors on Monday afternoon for another evaluation of the fracture in his right thumb, and while the 28-year-old hoped the cast immobilizing that finger would be removed Bengals head coach Marvin Lewis said he would not share the results of that evaluation on Monday.

So, as of Monday, the team is preparing for the Steelers as if AJ McCarron will start the wildcard round against the Pittsburgh Steelers on Saturday night at Paul Brown Stadium.

“We have to go into the week, obviously, regardless of Andy’s status, right now we’re going to into at least the early part of the week preparing with AJ,” Lewis said.

“It’s important for the football team.”

Sunday marked the three-week point since Dalton fractured the thumb on Dec. 13 against the Steelers. But even Dalton wasn’t sure how long it would take him to feel comfortable gripping and throwing a ball after having his hand casted for about a month.

“I’m doing more strengthening and making sure my conditioning’s there, running and cardio and things like that,” Dalton said Friday. “The footwork and stuff I should have down by now. That’s muscle memory. But I’m just trying to keep doing whatever I can.”

The Bengals will start the week thinking McCarron will have to lead the organization to its first playoff victory since 1988. McCarron will be making his fourth straight start and second appearance against the Steelers.