Roethlisberger Doesn’t Throw, Brown Not Cleared to Be at Practice for Steelers 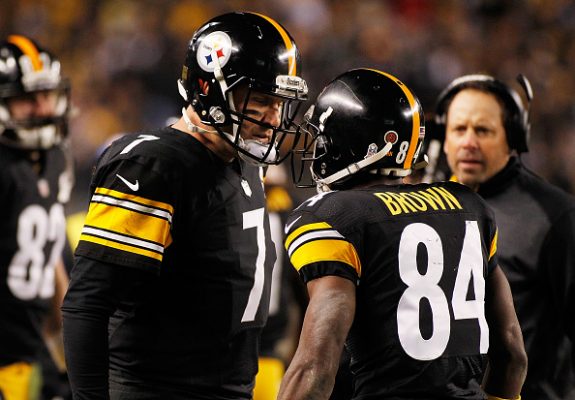 If you’re holding out hope that both Ben Roethlisberger and Antonio Brown are going to play Sunday in the AFC Divisional Playoff game against the Broncos, today’s news is not very promising.

The first report is about Roethlisberger, who didn’t throw on Wednesday, and now he’s not throwing again today, putting a solid amount of doubt that he’ll be able to throw come Sunday in Denver.

Ben told the Tribune-Review before practice Thursday that he wouldn’t be throwing today. “I am not going to do any throwing, I will do some handoff work and stuff like that.”

No matter how you look at it, there’s simply no way Ben is going to be anywhere near 100 percent for Sunday, which leads me back to an article posted earlier in the week about maybe just making it official that Landry Jones should be the guy Sunday against Denver.

Is there a chance that Ben doesn’t practice at all and plays Sunday? Sure – but do you really think that he’ll be effective with no practice and a bad shoulder?

As for the other big name on offense everyone wants to know about, that being Antonio Brown, he’s still not cleared to practice, and has to pass through his concussion in order to take the field at all.

For all the optimism of his snapchat video, I'm told Antonio Brown hasn't yet passed through the concussion protocol https://t.co/Zd6ulPZatd

Brown gave fans hope Wednesday in a Snapchat session that he might be able to take the field today, but again that is not the case.

Unlike Ben, I can see Brown playing if he doesn’t practice on Friday, as his injury isn’t something that is physical like Ben, and if he can pass the concussion tests, I still think he may be able to go.