Should the Steelers Go All In on Landry Jones and Sit Ben Roethlisberger Sunday? 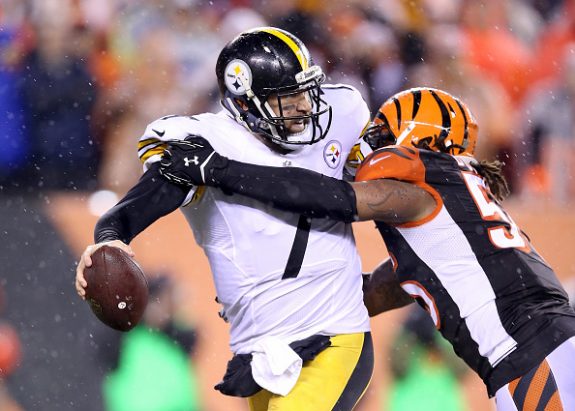 I already know that this is not going to be a very positive article and that the feedback is going to be rather harsh, but if think about it, it’s a legit question that must be asked..

Should the Steelers sit their injured franchise quarterback on Sunday in Denver in the AFC Divisional Playoff game and give the chance to backup Landry Jones to try and advance the Steelers to the AFC Title Game?

Yes, we all know what Ben Roethlisberger was able to ride in on a white horse on Saturday night and lead the Steelers down the field enough (with the help of penalties) to beat the Bengals in the Wild Card game.

Since then, the reports of what’s going on with Roethlisberger’s shoulder have been all over the place.

While most seem to be reporting that it’s a sprained AC Joint in his shoulder, there’s been reports of the injury shoulder being separated, and now a report that the QB has torn ligaments in his throwing shoulder.

When is enough just simply enough?

It’s evident that the shoulder isn’t going be anywhere near 100 percent, and that showed on Saturday when he threw pass after pass to the sideline and couldn’t throw the ball downfield, other than the one pass he attempted to get to Antonio Brown that wound up resulting in a 30-yard gain after penalties.

Some years injuries are just too much to overcome, and anyway you look at it, making the second round of the playoffs with the injuries the Steelers have suffered is nothing to be ashamed about.

With that, giving Landry Jones a chance to be the man under center Sunday may be the smartest long term move this franchise can make. Sure the chances of beating Denver with Jones are probably slim, but do you want to put the career of Roethlisberger in jeopardy if he takes yet another hit on that shoulder?

With this offense healthy, I am still convinced that this team can beat anyone. They showed it at points a few times this year, but with DeAngelo Williams unlikely to play, Antonio Brown suffering a concussion, and Ben with a bum shoulder, it might be time to give all the backups a shot to try to pull off a modern day ‘Rocky’ in Denver Sunday.

The defense played well in Cincinnati, and if they can repeat that outing vs Peyton Manning, it right away gives the Steelers a better chance at a win.

If a Landry Jones led offense can produce 14-20 points, it may be enough for the Steelers to pull off the upset win and then maybe Ben’s shoulder can heal significantly enough to play in the following Sunday’s AFC Title Game.

If Jones can’t get it done and the Steelers lose, get this team healthy for a 2016 run that should again put them in position to challenge the other AFC teams for a shot to play in the Super Bowl.

It’s not the worst option for the black and gold, just one that should be seriously considered before kickoff on Sunday.

Report: Roethlisberger to Play, Brown Likely Out for Playoff Game at Denver
Tomlin: Williams on the ‘Outside Looking In’ to Play vs Denver Sunday